Monosodium Glutamate (MSG): Use it or Loathe it? (Part II)

In the last issue, we discussed the nature, uses and food safety of monosodium glutamate (MSG). In this issue, let us look into the role of MSG in sodium intake and labelling issues of MSG.

From a culinary perspective, salt (sodium chloride) has its desirable properties including enhancing the positive sensory attributes of food. However, as a major sodium contributor in diet, the amount of salt added to food should be controlled because excessive sodium intake is associated with increased risk of hypertension, stroke and cardiovascular diseases. While abrupt absence of salt in food can make food less appealing, reduction of dietary sodium intake relies on modification of the salt taste. Besides gradual reduction of salt in food, other possible strategies include, but are not limited to, modification of size of salt particles, use of salt substitutes and replacement of salt with ingredients having other flavours. In addition to herbs and spices, MSG is another example of flavour enhancer to replace some of the salt in food.

You may be aware that both salt and MSG are sodium-containing compounds. Comparing to salt, MSG contains one-third the amount sodium as its counterpart. Whilst salt contains about 39 per cent of sodium, MSG contains
about 12 per cent sodium.

As a flavour enhancer, MSG imparts "umami" taste as well as a salt taste to food. When used in combination with a small amount of salt during food preparation, MSG has been reported to reduce the total amount of sodium in a recipe by 20 to 40 per cent. Studies have shown that it is possible to maintain food palatability with a lowered overall sodium level when MSG is substituted for some of the salt in soups. In those cases, the amount of MSG added to food is less than the quantity of salt being removed from it.

Nevertheless, same as salt and other sodium containing seasonings, MSG is a source of sodium in our diet. While small amounts of MSG can be used as flavour enhancer in some kinds of food, for example, not more than one teaspoon of MSG per kilogram of meat or half teaspoon per four to six servings of vegetables, adding more contributes little or no improvement in taste. All in all, from both health and technological points of view, if MSG is added to food, a minimum amount of MSG should be used to serve its flavour-enhancing properties.

Consumers can make informed choices by reading the food labels on prepackaged food. Under local regulation, if MSG is added to prepackagedfood, it is required to list out its specific name (i.e. monosodium glutamate) or identification number (i.e. 621 or E621) together with its functional class (flavour enhancer) in the ingredient list on the food label. 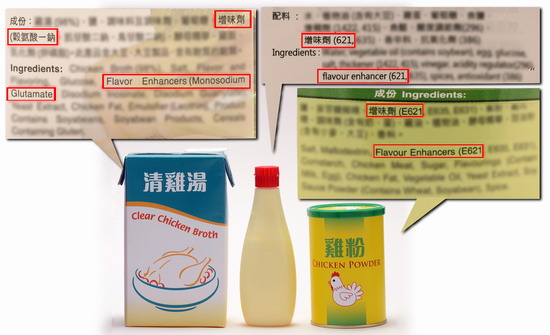 Glutamic acid and its salts including MSG can naturally occur in ingredients such as hydrolysed vegetable protein, autolysed yeast, yeast extract, etc. If any of these names show up in the ingredient list, you will know that glutamate-containing ingredients are present in the food.

The food trade is required by local regulation to make sure that information on the food label is accurate and not misleading. Food that contains added or naturally occurring MSG should not make "No MSG" claim. As "No added MSG" claim may leave the consumers with the impression that MSG is not present in the food, such a claim is undesirable for food with ingredients that naturally contain MSG.