Monosodium Glutamate (MSG): Use it or Loathe it? (Part I)

People may have opposing views on monosodium glutamate (MSG), a flavour enhancer that often receives public attention. Some chefs and food manufacturers may see MSG as an ally as it imparts the "meaty" taste and enhances flavour of the dishes and food products. Nevertheless, some consumers may loathe MSG and try to avoid it as much as they can because they believe that MSG is bad for them. In the first article of a series of two on MSG, let us look into the nature, uses and food safety issues in relation to MSG in food.

Nature and Sources of Glutamate and MSG

Indeed glutamate is not foreign to us. It is produced inside our body and is found in breast milk. Glutamate occurs naturally in almost all foods, including milk, meat, poultry, fish, vegetables, mushrooms, etc. In addition, certain food ingredients such as hydrolysed protein, autolysed yeast, yeast extract, soy extract, etc. also contain high levels of glutamate naturally.

In the early 1900's, a Japanese chemistry professor discovered that glutamate extracted from seaweed was the key to the distinctive taste of seaweed broth, which was different from the four basic tastes (i.e. sweet, sour, bitter and salty). He named this fifth taste "umami", meaning "meaty" or "savoury" in English terms and "xianwei" in Chinese term. Glutamate exists either in "bound" form (i.e. bound to other amino acids as part of proteins) or in "free" form (i.e. not bound to other amino acids as part of proteins). It is the free form of glutamate that has been shown to impart the "umami" taste in food and has a flavour enhancing effect (see Table 2).

Glutamate in MSG is chemically indistinguishable from glutamate present in food naturally. Our body metabolises glutamate from these sources exactly the same way.

People in different parts of the world have been incorporating glutamate-rich foods or food ingredients in their culinary tradition for a long time. Cheeses (e.g. Parmesan cheese), ripened tomatoes, dried mushrooms, fermented fish sauce and fermented soy sauce containing high levels of free glutamate are frequently used in our daily cooking, owing to their flavour-enhancing effect. 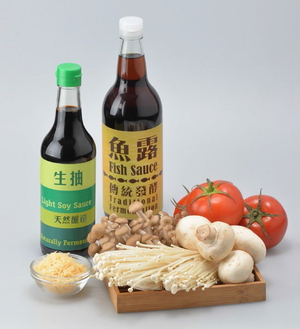 MSG and other flavour enhancers are more frequently used in soups, stews, stocks, meat-based sauces, seasoning mixes and snack foods. Nevertheless, the use of MSG in foods is self-limiting, in which an optimum taste can be achieved by adding a small amount of MSG and any excessive amount will contribute little or no improvement in taste.

Some people may consider themselves as sensitive to MSG and, over the years, there have been reports on cases of occurrence of mild and short-term symptoms (the symptom complex of headache, numbness/tingling in back of neck, flushing, muscle tightness and generalised weakness) after the consumption of MSG. Nevertheless, a number of international and national food safety authorities have evaluated the safety of MSG on multiple occasions and concluded that available evidence has failed to demonstrate a causal relationship between the consumption of MSG and the development of this symptom complex. MSG is considered safe for the general population at the level typically used in foods and having taking into consideration the usual dietary intake of glutamate from ingested protein.

In the next article, we will look into the role of MSG in sodium intake and labelling issues around MSG.