In June 2015, the Centre for Food Safety (CFS) announced the results of a risk assessment study on non-dioxin-like polychlorinated biphenyls (NDL-PCBs) including that relatively low levels of this group of chemical contaminants are more likely to be found in fish. The issue sparked the concerns of the public on eating fish, especially salmon. However, international and CFS studies have found that the benefits of consuming a variety of fish including salmon, mandarin fish and yellow croaker clearly outweigh the risks presented by current levels of contaminants in fish. This article discusses the benefits and risks of fish consumption, in particular, for women of child-bearing age and young children.

Fish is an excellent source of high quality proteins and omega-3 fatty acids. It also contributes to the intake of nutrients, such as iodine, selenium, calcium, iron and vitamins A and D. Omega-3 fatty acids such as DHA (docosahexaenoic acid) and EPA (eicosapentaenoic acid) are found in every kind of fish, but are especially high in fatty fish (e.g. salmon and yellow croaker) (see Table 1). 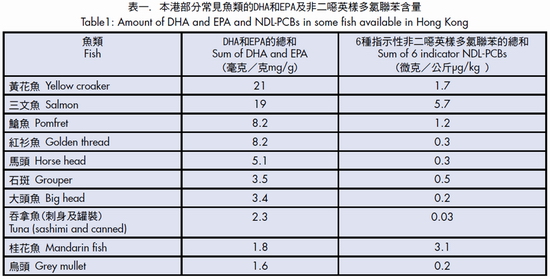 Omega-3 fatty acids help lower the risk of coronary heart disease and stroke, and are important for foetal neurological development. While calcium and vitamin D are important in developing healthy teeth and bones, iodine is needed for the production of thyroid hormones. A deficiency of iodine in the diet is associated with the development of goitre and arrested growth.

Fish is also a source of exposure to contaminants like dioxins, PCBs and mercury. However, previous CFS studies have confirmed that it is unlikely for the local population to experience, through the consumption of food, undesirable health effects of dioxins and PCBs, including NDL-PCBs. In addition, many overseas studies have reported a reduction in the level of these contaminants in fish over the years.

Methylmercury is the organic form of mercury and can adversely affect the nervous system in the developing foetus. Studies have shown that some predatory fish species may contain high methylmercury levels which are therefore a concern for women of child-bearing age. Besides, young children whose brains are still developing may be more susceptible than adults to the adverse effects of methylmercury, which include a reduction in intelligence quotient (IQ).

Opinions and Advice from Other Health Authorities

When comparing the benefits of omega-3 fatty acids with the risks of methylmercury among women of child-bearing age, maternal fish consumption, in general, lowers the risk of suboptimal neurodevelopment in their offspring compared with the offspring of women not eating fish.

The Food Consumption Survey and risk-benefit analysis conducted by the CFS revealed that the average fish and seafood intake by women of child-bearing age was about 450 grammes (~12 taels) per week and the benefits of eating such amount of fish outweighed the risks in terms of IQ gained by their developing foetuses. For those who ate a lot of fish and seafood (i.e. 1 500 grammes or ~40 taels per week), the benefits might be negated by the inclusion of certain types of large predatory fish in the diet.

The level of mercury in fish may vary according to the source and living environment. Generally speaking, smaller fish (below one catty), farmed fish, freshwater fish and non-predatory fish contain lower levels of methylmercury. Since excessive intake of methylmercury can affect the developing nervous system, women of child-bearing age and young children should consume a variety of fish in moderation and avoid consumption of large predatory fish such as tuna (especially the bigeye and bluefin species), alfonsino, shark, swordfish, marlin, orange roughy, tilefish and king mackerel.