Scientific Substantiation of Health Claims in the European Union

Health claims should be scientifically substantiated, i.e. a cause and effect relationship between a food/constituent (e.g. a nutrient) and a claimed effect has to be established according to generally accepted scientific evidence. Places with health claim regulations, such as the European Union (EU), the USA and Australia/New Zealand, have put in place a scheme for health claims evaluation. The European Food Safety Authority (EFSA) has been mandated to evaluate the validity of health claims made on foods in the EU. EFSA has issued several guidance documents to facilitate claims submission and evaluation. This article introduces the EU's approach to scientific substantiation of health claims by making reference to these documents.

How to Decide Whether a Health Claim is Substantiated?

In order to determine the validity of health claims, two key issues of a health claim are being examined by EFSA. Firstly, a health claim shall be clearly defined, which includes the definition and characterisation of the food/constituent and the definition of the claimed effect. Secondly, a health claim shall be substantiated by scientific evidence, which must include pertinent human studies. EFSA considers that a cause and effect relationship has not been established, if an unfavourable outcome is obtained from any one of the key questions addressing the claim (see Figure). 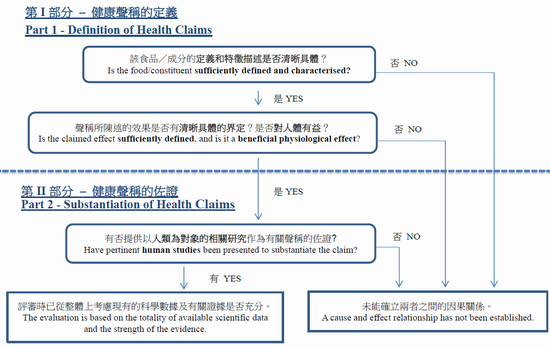 How to Decide Whether a Health Claim is Substantiated? (Source: EFSA General Guidance for Article 13.1, 13.5 and 14 Health Claims Evaluation)

In addition to specifications, such as composition (i.e. ingredients and amounts), physical/chemical properties and microbiological characteristics of the food/constituent, EFSA will take into consideration of the manufacturing process (e.g. batch to batch variability test), stability information (e.g. information with respect to storage conditions, shelf-life, and analytical procedures) and bioavailability data (e.g. absorption studies) when determining whether a food/constituent is sufficiently defined and characterised.

Only health claims made on food/constituent showing beneficial physiological effects that have been sufficiently defined are permitted. In other words, these claimed effects must be beneficial and measurable by generally accepted methods, such as analytical tests and validated questionnaires (e.g. reduction of LDL-cholesterol concentration, frequency of bowel movement). General and non-specific health claims (e.g. good for heart health, improve gut health) will not be considered by EFSA.

Scientific substantiation is the major aspect of evaluation of health claims. The evidence is weighed taking into account the totality of available scientific data (i.e. including pertinent studies that are in favour and not in favour of the food/health relationship) and the strength of the evidence, which is assessed by considering several dimensions, including:

EFSA's evaluation of a health claim is mainly based on human studies. Non-human studies (i.e. studies in animals/ in vitro ) are supporting evidence for showing the mechanisms/pathways and the biological plausibility of the claim.

Besides the quality of evidence, EFSA will also consider the generalisability (i.e. the translation of research evidence into application on the target population) and the feasibility of consuming the suggested amount of food/constituent in a healthy balanced diet to obtain claimed health effect when deciding whether the assessment is a favourable one. Although safety assessment is not part of the health claim substantiation, EFSA will note the possible adverse effects, if any, in the opinion.

Authorisation of Health Claims in the EU

Under the EU health claims evaluation scheme, EFSA is responsible to carry out scientific assessments, whereas the European Commission (EC) is the official body authorising health claims in the EU. EFSA's advice forms the basis for authorisation decisions by the EC. In addition, the EC will take into consideration of other issues, such as safety and policy issues (e.g. whether the claim is in line with the nutrition policy) when authorizing a health claim. According to the EU register on health claims, as of March 2015, there are over 250 permitted health claims on the approved list.