In December 2014, the Centre for Food Safety (CFS) received notification from Canadian authorities that Paralytic Shellfish Poisoning (PSP) toxins at 1.1 ppm were detected in three consignments of live geoduck from British Columbia (BC). The level exceeded the Canadian standard which is also the action level in Hong Kong (i.e. a maximum level of 0.8 ppm). Besides stopping the sale of the products and banning the import from the same harvest area in BC, the CFS immediately stepped up the import surveillance of geoducks from other parts of Canada. Subsequently, 16 samples of geoduck harvested from other areas of BC were found containing PSP toxins at levels exceeding 0.8 ppm. To protect public health, the CFS immediately informed the Canadian authorities of the test results and extended the import ban on geoducks to the whole BC.

PSP Toxins and their Occurrence in Food

PSP toxins, produced by certain microscopic algae, are a group of related naturally occurring toxins. Shellfish (such as geoducks, mussels, clams, oysters and scallops) filter water through their gills and eat food particles including algae. When the shellfish eat toxins-producing algae, the toxins will be concentrated in tissues of the shellfish, in particular the internal organs. In geoducks, the toxins are mainly found in the viscera ball. 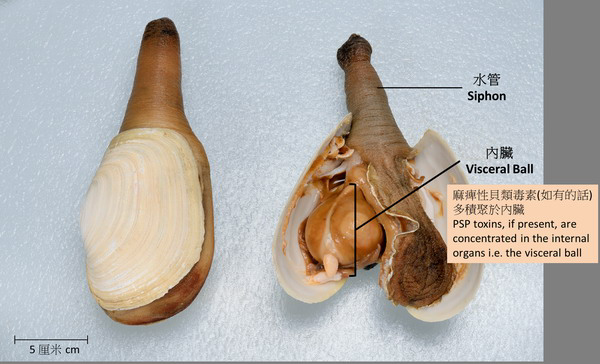 Discard the visceral ball before consumption

It is normal and poses no problems when toxins-producing algae are present in marine water at very low concentrations. However, when the algae "bloom", they become a greater food source for shellfish. The more algae the shellfish eat, the more PSP toxins they accumulate. After the number of toxins-producing algal cells in the water returns to normal low levels, the shellfish gradually flush the toxins from their bodies. However, according to literature, it can be several days to several months or longer before the shellfish are safe for consumption again.

PSP toxins are powerful nerve poisons with no known antidote. Early symptoms include tingling of the lips and tongue, which may appear from 30 to 60 minutes after eating the toxic shellfish. Symptoms may progress to loss of control of arms and legs followed by difficulty in breathing. Death can occur in severe cases.

Toxic shellfish cannot be distinguished from non-toxic ones visually and cooking does not destroy PSP toxins. The public are hence advised to purchase shellfish from reliable retailers, discard all the internal organs of the shellfish before cooking and avoid overindulgence in shellfish consumption.