Recall of Salmonella Contaminated Chocolate Products in the United Kingdom

On 23 June 2006, the Food Standards Agency (FSA) of the United Kingdom (UK) announced that Cadbury recalled seven types of chocolate products in the UK due to possible contamination with an unusual strain of salmonella named "Salmonella Montevideo". As the products of the Company are readily available locally, the Centre for Food Safety (CFS) promptly contacted the sole agent of Cadbury products, major food retailers and the British Consulate-General in Hong Kong. A small number of one of the affected products were found locally but were immediately withdrawn from sale by the concerned supermarket chain. It was subsequently concluded that eating particular Cadbury chocolate products was the most likely cause for the recent outbreak of this unusual strain of salmonella in the UK. On 1 August 2006, the FSA was notified by Cadbury that it intended to restock five types of products that had been recalled on 23 June 2006 due to possible contamination with salmonella. The investigation in the UK was still in progress as of early August 2006.

Salmonella is a group of bacteria that can be found in the intestinal tract of humans as well as both wild and domestic animals including poultry, pigs and pets like dogs, cats and reptiles. A variety of salmonella species can cause food poisoning in humans. In food, salmonella is more commonly found in beef, pork, poultry, milk, eggs and their products. By eating raw or under-cooked food that contains the bacteria or by consuming cooked ready-to-eat (RTE) food that had been cross-contaminated with salmonella from other foods or infected humans, food poisoning can occur. The incubation period is from 6 to 72 hours, usually about 12 to 36 hours. The symptoms include nausea, fever, abdominal pain, diarrhoea and sometimes vomiting. The symptoms are more severe in infants and the elderly. Salmonella present in raw food can be destroyed by cooking thoroughly. However, cooked food must be handled carefully in order to prevent re-contamination by salmonella.

Under the CFS food surveillance programme, RTE food samples collected from the market are analyzed and their safety are assessed using the microbiological criteria set out in the Microbiological Guidelines for RTE Food. The guidelines specify that no salmonella bacteria should be detected in 25 grams of the RTE food sample tested.

The CFS has been closely monitoring the development of the issue and follow up actions were undertaken immediately. The CFS contacted the sole agent of Cadbury products, major food retailers and the British Consulate-General in Hong Kong. The agent informed that no affected products had been imported through them and a hotline had been set up by them to answer questions from concerned customers. Of the major food retailers, the management of a major supermarket chain informed the CFS that one of the affected products had been imported into Hong Kong through their own channels. The concerned products were immediately withdrawn from sale. The CFS also informed concerned members of the food trade of the issue and reminded them that they should ensure that all foods sold are fit for human consumption. Since the UK authority was still conducting further investigations, the CFS would continue to monitor the development of the incident. In Hong Kong, the CFS has liaised with the Centre for Health Protection (CHP) to monitor the pattern of salmonella infection. Preliminary data from the CHP showed one laboratory isolate of Salmonella Montevideo in the first two quarters of 2006 through the Salmonella Surveillance System. CHP would continue to monitor the situation. 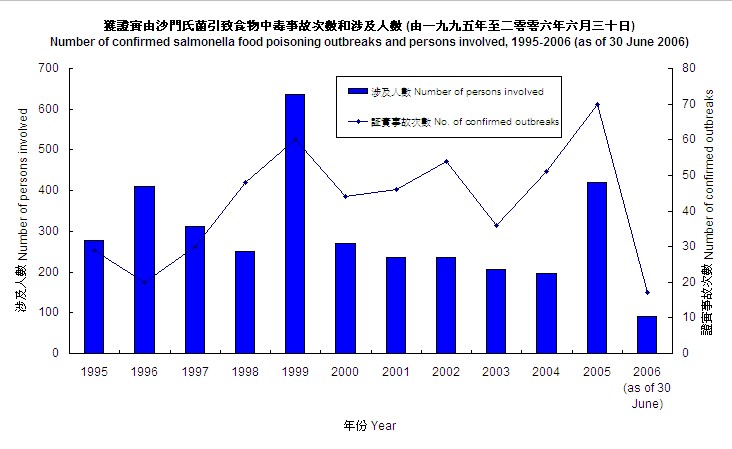