This is a publication of the Food and Public Health Branch of the Food and Environmental Hygiene Department of HKSAR Government. Under no circumstances should the research data contained herein be reproduced, reviewed, or abstracted in part or in whole, or in conjunction with other publications or research work unless a written permission is obtained from the Department. Acknowledgement is required if other parts of this publication are used.

Artificial sweeteners are substances which are substantially sweeter than the common carbohydrate sweeteners such as sucrose. Their sweetness potencies range from about 30 times to several thousand times that of sucrose. They provide little or no caloric value to the normal diet and they do not affect insulin or glucose levels. Hence, they may assist in weight management and provide sweet-tasting foods for people with diabetes.

Based on this finding, it could be concluded that exposures to the artificial sweeteners including acesulfame potassium, aspartame, cyclamic acid, saccharin and sucralose from beverages do not pose a health risk to secondary school students in Hong Kong in both average and high consumers.

3. Artificial sweeteners are generally considered as those substances which on a weight basis are substantially sweeter than the common carbohydrate sweeteners such as sucrose. Their sweetness intensities range from about 30 times to several thousand times that of sucrose.1 Accordingly, they can be used at much lower concentrations in foods. 2

5. Artificial sweeteners have become more popular and their use has been expanding for many years. They are now common ingredients in a wide range of foods and beverages including soft drinks, candies, chewing gum, desserts like pudding, gelatin, and ice cream. In addition, several artificial sweeteners are available for use as table-top sweeteners, which consumers add directly to coffee, tea, fruits, breakfast cereal, etc. 4

6. Artificial sweeteners can deliver an equivalent sweetness value to sugar at a lower cost and can offer consumers a way to enjoy the taste of sweetness with little or no energy intake.5 Hence, they may assist in weight management. They may also be used to provide sweet-tasting foods and beverages for people who have to restrict carbohydrate intake, such as people with diabetes as they do not affect insulin or glucose levels.34

7. As with all food additives, artificial sweeteners have been assessed for their safety before they are permitted for use in foods. The Joint Food and Agriculture Organization/ World Health Organization Expert Committee on Food Additives (JECFA) evaluated the safety of artificial sweeteners based on toxicological data obtained from animal and/or human studies. An Acceptable Daily Intake (ADI) would be allocated according to the safety evaluation.

8. An ADI is the amount of a food additive, expressed on a body weight basis that can be ingested daily over a lifetime without appreciable health risk.6 Animal tests are normally used to determine the maximum dietary level of an additive which demonstrates no toxic effects, i.e. the "no-observed-effect-level" or NOEL and the most sensitive animal species are used. The NOEL is then used to determine the ADI by applying a safety factor usually of 100.7

10. This study focused on the exposures to artificial sweeteners from beverages as they are recognized as the main dietary source of artificial sweeteners. For the purpose of this study, beverages means any pre-packed non-alcoholic ready-to-drink drinks which include carbonated drinks, flavoured bottled water, sports drinks, herbal drinks, dairy-based drinks, soy-based drinks, juice drinks, tea and coffee.

11. Secondary school students were chosen as the population of this study because they are generally recognized as the population group which is more likely to have above average consumption of foods containing artificial sweeteners, such as soft drinks, candies and chewing gums.

13. The term "artificial sweeteners" employed in this study includes both synthetic compounds and naturally occurring sweetening agents. This is in line with the existing legislation. As stipulated in the Regulations, artificial sweetener means "any chemical compound which is sweet to the taste, but does not include any sugars or other carbohydrates or polyhydric alcohols".

14. Among the six groups of artificial sweeteners listed above, all except thaumatin were included in this study. Thaumatin was not included in this study because, according to the JECFA's evaluation8 , thaumatin is a protein that is readily digested to food component. The dietary effect of thaumatin is only to make an insignificant contribution to the normal protein intake. JECFA allocated an ADI of "Not Specified" to thaumatin meaning that it is of very low toxicity which, on the basis of the available data, the total dietary intake of the substance arising from its use at the levels necessary to achieve the desired effect and from its acceptable background in food does not represent a hazard to health.

18. These samples were categorized into those three groups according to the method of categorization as listed in paragraph 16. Samples of tea, coffee, soy-based drinks, juice drinks, dairy-based drinks, sports drinks and herbal drinks were put together under the group "other beverages".

19. Samples were then sent to the Food Research Laboratory (FRL) of FEHD for analyses. The levels of studied artificial sweeteners in each sample were analysed quantitatively by High Performance Liquid Chromatography (HPLC).

22. The exposure estimates were then compared with the respective ADIs established by JECFA for these artificial sweeteners (Table 1).

23. The average levels of consumption of beverages for secondary school students for the three groups were shown in Table 2.

Table 2: Average Consumption of Beverages for Secondary School Students who Consumed the Beverages

Concentration of Artificial Sweeteners in Beverages

Table 7: Dietary Exposures to Artificial Sweeteners from Beverages for an Average Consumer in Secondary School Students

26. A further analysis was undertaken to estimate the risk that high consumers might be exposed to. In this study, the 95th percentile of the exposure levels to artificial sweeteners was used to represent the exposures for high consumers. The results are shown in Table 8.

29. Therefore, it could be concluded that exposures to the studied artificial sweeteners, acesulfame potassium, aspartame, cyclamic acid, saccharin and sucralose, from beverages do not pose a risk to secondary school student's health for both average and high consumers.

32. The results also showed that 43 out of 62 samples (70%) contained more than one artificial sweetener. Sweetener blends have become more popular in the production of foods and beverages, making use of the benefits of multiple sweeteners, as synergistic taste enhancement and sweetness profile modifications offer advantages over the use of single sweeteners. 19

33. From a food safety point of view, this practice allows sweeteners to be present at lower levels, and thus, consumption of single sweetener can be lowered.19

Exposures to Artificial Sweeteners from Sources Other Than Beverages

35. We applied the Italian data to our study results to have a crude estimation of the dietary exposures to artificial sweeteners from dietary sources other than beverages. Adding these estimates to our results, the percentage ADI of exposures to the four artificial sweeteners from beverages and other dietary sources ranged from 6% for aspartame to 20% for saccharin for average consumers, and ranged from 19% for both aspartame and cyclamic acid to 65% for saccharin for high consumers. The estimated exposures for both average and high consumers were still below the ADIs.

37. Due to the lack of the consumption data of each beverage containing artificial sweetener by each person, exposures from beverages for those who exhibit "brand loyalty" cannot be estimated.

40. As for high consumers, the exposures to the studied artificial sweeteners were also below the ADIs, ranging from 2.6% of the ADI for saccharin to 23.4% of the ADI for acesulfame potassium.

41. It can be concluded that exposures to the five artificial sweeteners, acesulfame potassium, aspartame, cyclamic acid, saccharin and sucralose, from beverages do not pose a risk to the health of secondary school students for both average and high consumers.

42. Some advices are given to the trade and the consumers over the use of artificial sweeteners:

(a) Food manufacturers should only use the permitted artificial sweeteners stipulated in the Food Adulteration (Artificial Sweeteners) Regulations (Cap. 132 Sub. Leg. U) in accordance with Good Manufacturing Practices;
(b) To reduce the amount of exposure to each sweetener by consumers, using of more than one sweetener in a product can be considered;
(c) Artificial sweeteners should be properly labelled either by their specific names or the category on the packages according to the Food and Drugs (Composition and Labelling) Regulations. 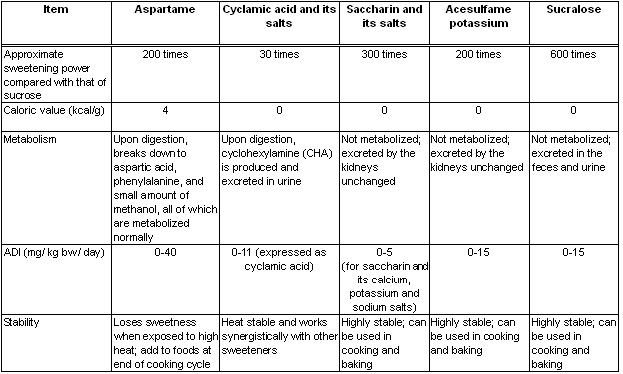