On 25 April 2014, the Centre for Food Safety (CFS) issued a food allergen alert to advise consumers allergic to peanut to stop consuming a kind of prepackaged almond cracker manufactured in Korea since the product m ight contain peanut which has not been listed on the food label.

Peanut is a common food allergen which can cause allergic reactions in sensitive individuals. People who are allergic to peanut may develop symptoms and signs like swelling of face, tongue or lips, shortness of breath and itchiness upon consumption. Anaphylactic shock (an acute, severe and potentially life-threatening allergic reaction) may even develop in severe cases. In Hong Kong, all prepackaged food is required to indicate the presence of eight specified allergens, including peanut.

The CFS has informed the concerned distributor and retail shops, and alerted the trade to stop selling the product concerned. Consumers who are sensitive to peanut should stop eating the affected product and seek medical treatment if allergic symptoms develop after taking the food. 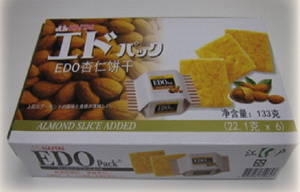