The PMSAS aims to assess GM foods before they can be sold in the local market. The assessment approach is different from that for specific chemicals such as pesticides in food. Whole foods are complex mixtures of compounds that vary in composition and nutritional value, but not chemically defined substances. Furthermore, the intake amount of GM foods by human is much higher than that of most chemicals for food use. As such, the traditional toxicological testing and risk assessment procedures for chemicals in food are not quite suitable for GM foods. Instead, a comparative approach has been developed to address or structure the safety assessment of GM foods.

The comparative approach is aimed to establish the relative safety of a GM product with its comparator, i.e. the conventional or non-modified counterpart, by determining if a GM product has new or altered hazards. The comparator is usually considered safe on the basis of its long history of consumption. For example, GM soya bean containing higher level of oleic acid is compared with its non-GM parental line and commercial cultivars for assessing differences in compositional constituents. In cases if a comparator is known to associate with certain adverse effects, the components causing the effects should be well characterised. The comparison will take into account the change of the components as a result of the genetic modification.

The introduced desirable characteristics which are absent from the non-modified counterparts will be assessed under the comparative approach. For example, the insect resistance characteristic is conferred by the Bt proteins, and toxicological study of the Bt proteins will be included in the safety assessment.

Besides assessing the safety of the introduced desirable characteristics, the assessment will also address unintended effects as a result of the genetic modification. The modification in GM organism usually involves the insertion of a new gene and this might change the expression of other genes in the modified organism, which in turn affects the normal metabolism and level of endogenous toxins or allergens in the GM organism. In addition, the modification has the potential to create additional new proteins that might be toxic or allergic to susceptible individuals. To address these unintended effects, the GM organism will be compared with its comparator, in terms of toxicity, allergenicity, nutritional value, composition, etc.

The approach for conducting safety assessment of GM organism has been included in different sets of guidance formulated by the Codex Alimentarius Commission. The principle of the assessment conducted by food safety regulatory authorities is usually in line with the guidance. In general, only the GM organism, but not its products, generated by a developer would be assessed, i.e. GM corn, instead of the corn chip made from GM corn, would be assessed. 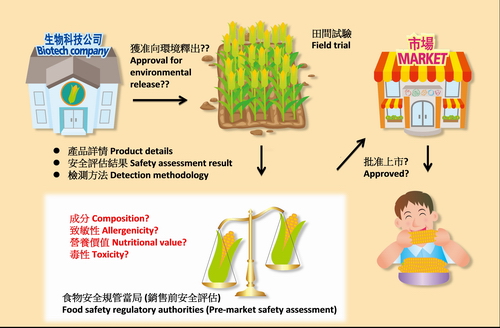 With active development of GM foods and availability of GM foods with introduced characteristics that may be attractive to farmers, food manufacturers or consumers, more varieties of GM foods from different places of origin are expected to enter the international market in the future. Echoing the recommendation of the World Health Organization and enhancing the local control of GM foods, it has been proposed to introduce the PMSAS locally. The PMSAS would provide the legal basis for preventing unauthorised GM products from entering the local market and establish a mechanism for obtaining transgenic information and reference materials for testing of GM products from GM food developers.