Blemish on Genetically Modified Foods or Not?–Take a Closer Look

From time-to-time, there are news reports on the safety of genetically modified (GM) foods that cause ripples of concern among consumers. You may recall news reports on rats showing big tumours after being fed with GM corn, or another story that children were fed with unapproved GM rice for research purpose. Are these reports showing that GM foods are not safe? We will discuss it in this issue.

GM food is a controversial subject. Consumers are probably scared by studies on animals fed with GM food presented certain adverse effects like enlarged organs, dysfunction of organs, cancers, etc. Researchers of these studies attributed these effects to the intake of GM food. Yet, these studies have been criticised by scientists or national food safety authorities, that there were flaws in the study design, result analysis and interpretation.

Some common criticisms include small sample size, incorrect use of statistical analysis and insufficient evidences on the alleged adverse effects. Small sample size cannot exclude the possibility of occurrence of adverse effects by chance alone, especially for carcinogenicity studies. Statistical analysis is generally conducted to see if the observed effects are random occurrence or biological variation, while unconventional methodology was incorrectly adopted by some researchers. In addition, some studies did not provide further supporting evidence of the observed effect. These all can lead to invalid and misleading conclusion.

In fact, animal studies using the whole GM food has its limitations. Different from the testing of food additives or pesticides which are chemically defined, whole foods are complex mixtures of compounds that vary in composition and nutritional value. In addition, the food being studied may not be the usual diet of the animal subject, and the incorporation of such food in the diet has to be decided properly to avoid nutritional imbalance.

That said, animal feeding studies on GM foods may be used under certain circumstances. For example, these studies may be conducted to demonstrate the nutritional benefit as well as to detect unintended effects resulting from feeding with GM plant with fortified nutrients. 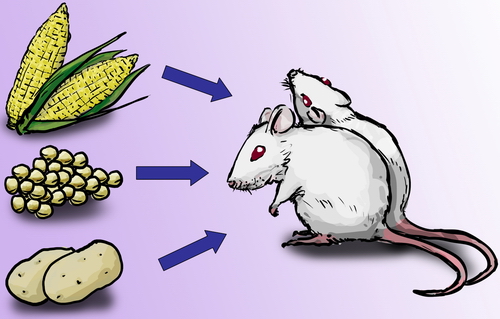 The crops may not be the usual diet of animal subjects; the incorporation of the GM food in the diets requires adjustment to avoid significant impacts on dietary balance.

Unethical Research Instead of Safety Assessment

Apart from animals, human subjects may also be recruited for studies on GM foods. In both cases, ethical approval is required. There was an incident in which a group of researchers was accused of carrying out a study in healthy schoolchildren by feeding them with fortified GM rice without ethical approval. The GM rice, known as golden rice, is yellow in colour because of the enhanced β-carotene (pro-vitamin A) content by genetic modification. This GM rice can potentially alleviate the problem of insufficient vitamin A intake in the population in some developing countries. Currently, golden rice has not yet passed the safety assessment by national food safety authorities, and hence, has not been proven safe for human consumption. However, it may be submitted for assessment in the future and sold in the market after evaluation and approval. As the product has fortified nutrient, additional nutritional assessment would be required to assess the consequences of the change and whether the nutrient intakes are likely to be altered by the introduction of such food into the food supply.