Genetically modified (GM) animals may perhaps be imagined as biohazard organisms or chimera, as portrayed in some films or TV games. Some people may also wrongly regard GM animals as cloned animals. In fact, GM animals, similar to GM plants, are organisms with their genes modified for desirable characteristics. In this issue, we will talk about the differences between animal cloning and genetic modification, and the potential of GM animals for food use.

GM animals are different from cloned animals. Some people may confuse these two types of animals as both of them are developed from biotechnology. Cloning does not involve any change in the DNA, while genetic modification may involve alteration, insertion, or deletion of DNA. While there is currently no GM animals that have been approved for food use yet, meat or milk from the offspring of cloned animals may have already been available in the market. Risk assessment conducted by the US Food and Drug Administration (FDA) on the food safety of cloned animals concluded that meat and milk from cow, pig and goat clones, and the offspring of any animal clones are as safe as conventional food.

The main purpose of cloning is to preserve some good qualities, whilst genetic modification aims at introducing desirable characteristics that can be passed to offspring. With regard to GM animals potentially for food use, the animals are modified to enhance the overall performance which in turn will deliver in agronomic and/or economic benefits.

Similar to GM plants, increase in productivity is one of the main targets of GM animal production. The most well-known example is GM salmon, featuring Atlantic salmon engineered to contain the growth hormone gene from the Chinook salmon. As such, the GM salmon can grow faster than conventionally farmed Atlantic salmon. 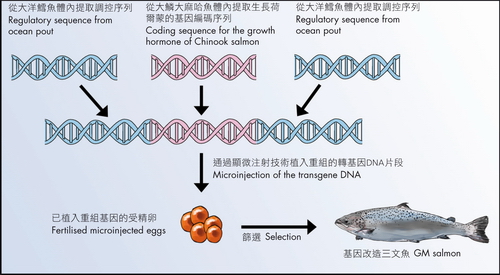 DNA fragments from other fish species are recombined and injected into the fertilised eggs of Atlantic salmon.

Apart from introducing growth hormone, antimicrobial proteins or enzymes can be incorporated in a modified animal to decrease its susceptibility to infections. Genetic modification can also help improve animal nutrition. Gene encoding enzyme for the digestion of phosphorus compound has been introduced into pigs to make better use of phosphorus in pigs' feed. This can reduce the use of phosphate supplements and also the amount of phosphorus in pig manure.

Approval of GM Salmon for Food Use

GM salmon could be the first GM animal approved for food use but it is uncertain whether this would pave the path for other GM animals in the pipeline. The US FDA concluded that food derived from the GM salmon has been assessed as safe as food from conventional Atlantic salmon. Yet, there is currently no information when the GM salmon will be approved for marketing. Some environmentalists or consumers oppose the marketing of GM salmon partly due to the concerns regarding the potential environmental impact. They have concern that the GM salmon may be accidentally released from the culture facilities and confinement measures are not sufficient to prevent the survival of the fish in the environment. The growth advantage of the GM salmon may endanger the survival of wild salmon and the modified genes may even be passed to close relatives in the wild. However, the preliminary finding of a draft environmental assessment issued by the US FDA is that the GM salmon would not have a significant impact on the US environment, under the specific conditions for production and grow-out of the GM salmon.

Besides the controversial GM salmon, some GM food incidents, such as research trial on feeding children with GM rice and study showing mice developed giant tumors after being fed with GM corn, have also raised public concern. We will talk about these in the next issue.