This article reviews the food poisoning cases related to food business in year 2011.

The Centre for Food Safety (CFS) plays a major role in the investigation of food poisoning outbreaks related to food premises and food business. In year 2011, the CFS received 290 referrals from the Department of Health on food poisoning outbreaks that affected a total of 1 036 persons. After a continuous decline since 2006, the number of outbreaks in 2011 slightly increased as compared with that of 2010 (Figure 1). 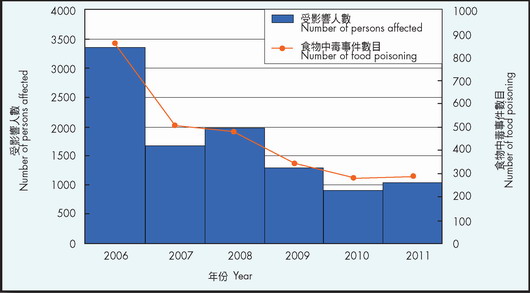 For all cases, bacteria were by far the most common causative agents which accounted for about 81% of the outbreaks. Other causative agents were biotoxins (9%), viruses (6%) and chemicals (4%). The pattern is generally similar to that of the past five years. Vibrio parahaemolyticus, Salmonella spp. and Staphylococcus aureus remained the top three causes of bacterial food poisoning outbreaks (contributing to 88% of the bacterial outbreaks in total).

Cross contamination by raw food, inadequate cooking, improper holding temperature and contamination by food handlers were the top four contributory factors of food poisoning outbreaks identified in 2011 and this pattern is similar to that of the past five years (Figure 2). 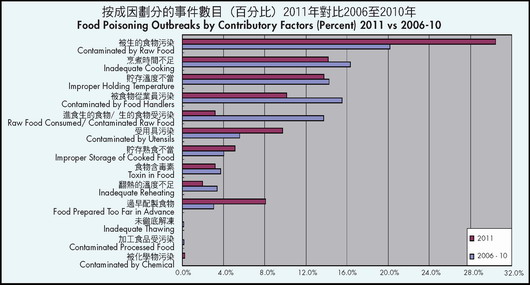 Below are two major food poisoning outbreaks occurred in 2011 that illustrate the importance of good hygiene and food safety practices.

In June 2011, four clusters of food poisoning outbreaks affecting a total of 64 persons related to a Shanghai-styled restaurant were reported to the CFS. During inspection of the food premises, the "drunken chicken", which was supposed to serve as cold dishes, was found to be kept under inappropriate high temperature for prolonged period. Both stool specimens from victims and one of the food handlers were tested positive for Salmonella Group D. A sample of "drunken chicken" taken at the inspection was also found to be present of the bacteria belonging to the same species. It suggested that contamination of the food item might be a contributing factor of the outbreak. The licensee was prosecuted and convicted of selling food unfit for human consumption. Health advice on food, environmental and personal hygiene particularly on proper preparation and storage of the incriminated food items as well as food handling procedures were given to the restaurant operators and their staff. Follow up visits were conducted to monitor the progress and ensure proper implementation of food safety measures.

In February 2011, four clusters of food poisoning outbreaks affecting a total of 17 persons were reported to the CFS. All those victims involved had consumed "egg white soufflé ball with red bean fillings " ( 高力豆沙 ) at a food premises. The suspected causative agent was Salmonella spp.. Field investigation revealed that the incriminated food item was not stored in an appropriate temperature for prolonged period after preparation and did not undergo adequate cooking. Also the stool specimens from two victims were tested positive for Salmonella Group D. These findings might be the contributing factors accounting for the outbreak. Health advice on food, environmental and personal hygiene was given to the restaurant operators and their staff. Follow up visits were also conducted to monitor the progress and ensure proper implementation of food safety measures.

The number of reported food poisoning outbreaks related to food premises and food business has decreased considerably over the past few years and the figure remained at a relatively low level in 2011. Government's efforts in safeguarding food safety, active participation of the trade and heightened awareness of the public on food safety are some factors contributing to the decline. The trade and public are advised to adopt and adhere to food safety practices to avoid the occurrence of food poisoning outbreaks.