Subsequent to the Mainland authority's report on 26 December 2011 regarding the detection of excessive levels of aflatoxin M1 at 1.2 μg/kg in a popular Mainland brand of pre-packaged milk, there was much media and public attention. This article updates the relevant assessment and investigation after the Centre for Food Safety (CFS) became aware of the report on the same day through daily food incident surveillance.

Aflatoxins are Undesirable for Human Health

Aflatoxins are a group of toxins produced by three species of mould (fungi) of the genus Aspergillus, namely, A. flavus , A. parasiticus and A. nomius. Aflatoxin B1 is the most predominant form in aflatoxin-contaminated crops while B2, G1 and G2 are also commonly found among about 20 aflatoxins. When cows, sheep, goats or other ruminant animals have consumed feeds contaminated with aflatoxins B1 and B2, aflatoxins M1 and M2 will be formed as a result of the metabolic process in liver of ruminants and excreted in milk. In other words, human beings can be exposed to the toxins through consumption of contaminated milk and other foods.

Aflatoxins can cause both acute and chronic toxicity. Aflatoxin B1 is the most potent aflatoxin and can cause acute liver damage and cirrhosis in animals. Naturally occurring aflatoxins, including aflatoxin B1 has been classified as a human carcinogen (Group 1) by the International Agency for Research on Cancer (IARC). Aflatoxin M1 is also classified by IARC as a possible human carcinogen (Group 2B) where it has a cancer potency at about one-tenth that of aflatoxin B1. The relationship between aflatoxins and liver cancer may be complicated by other factors, including liver carcinogens such as hepatitis B virus. 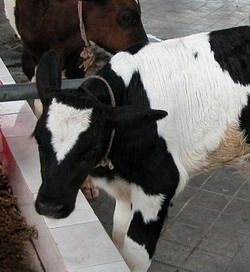 Cows will metabolise aflatoxin B1 in contaminated feeds to give aflatoxin M1, which is found in milk.

Once produced, aflatoxins are stable in many foods. Common cooking methods like boiling, pressure cooking (autoclaving) and pasteurisation will not be able to destroy aflatoxins completely. Control at source is the most effective means for reducing aflatoxins.

Since the aflatoxins-producing moulds are more commonly found in warmer parts of the world, a wide range of tropical and subtropical crops can be affected. Peanuts, corn and cottonseeds are, among others, most frequently incriminated. The most common cause of aflatoxin contamination for crops in the field is major drought which increases their susceptibility to Aspergillus infection. After the crops are harvested, contamination can occur during storage when there is delayed drying or when the moisture level exceeds a certain critical level. Pests like rodents and insects present during storage may also facilitate mould infestation for some commodities. If required, physical methods like cleaning and sorting of mould-affected products, milling of grains and fermentation are known to be capable of reducing the amount of aflatoxins present to levels acceptable for consumption.

Milk is among the important sources of aflatoxins in the human food chain. While both aflatoxins M1 and B1 can be present in milk, the former is about ten times more abundant. Taking into account the potential quantity of human consumption as well as the vulnerable population, exposure to aflatoxin M1 through the consumption of milk has all along been a greater concern than other aflatoxins from the public health perspective.

In Hong Kong, the CFS conducts regular surveillance on aflatoxins in milk. From 2009 to 2011, the CFS took a total of 129 milk samples for aflatoxin analysis. Though 16 samples were found to contain aflatoxin M1 at levels ranged from 0.01 to 0.22 μg/kg, none had exceeded the relevant local standards as well as that of the Codex (same as Mainland standard).

In addition, as a follow-up to the incident detected on 26 December 2011, the CFS has contacted both the General Administration of Quality Supervision, Inspection and Quarantine of Mainland China and the concerned local distributor. Aflatoxin testing on local samples of the alleged brand of milk taken subsequently was able to meet both the local and Codex requirements. It was also revealed that the milk product concerned did not come from the affected area.