Matchmaking of Food and Preservatives

The foods that we eat are rarely sterile. Their nutritious nature attracts ranges of microorganisms including bacteria, yeasts and moulds to grow on. However, just like us, each type of microorganisms has their own food preference.

Microorganisms are pickier than we do! Each type of microorganisms has their likes and dislikes. For instance, foods with high acid content e.g. soft drinks are welcomed by yeasts and moulds but not most bacteria. Similarly, moulds love breads with relatively low moisture content but not other microogranisms. No microorganisms would like to have a taste on those heat treated foods stored under oxygen free environment e.g. canned meat except those spore-forming anaerobic bacteria! The chemical and physical properties of the foods as well as their processing and storage determine what types of microorganisms are able to grow on.

Even though not all microorganisms cause food spoilage or foodborne diseases, probably no one would like to share our tasty food with microorganisms. To get microorganisms out of our food, our ancestors started using various methods including adding ranges of chemicals to foods by trial and error. The use of preservatives is considered as a continuation of these old practices.

The Use of Preservatives

Like doctors prescribe medications for us when we are sick, food manufacturers apply specific preservatives from a range of choices, based on their knowledge of the antimicrobial spectrum of preservatives, the nature of food and preservatives as well as the storage and handling conditions of food, to knock out those microorganisms which love their products most.

Features of Some Common Preservatives

Moulds and Yeasts Fighters –Benzoates and Their Derivatives plus Sorbates

Both benzoates and sorbates occur naturally in some berries but are prepared synthetically for food use. They inhibit yeasts and moulds effectively in acidic foods, where the growth of some bacteria is not supported. That is the reason why you can easily find benzoates and/or sorbates on food labels as preservatives in sour foods like soft drinks.

Unlike benzoates, their esters e.g. methyl para-hydroxybenzoate can be used over a wide range of pH to inhibit yeasts and moulds. Therefore, benzoate derivatives are not only used in acidic foods such as chilli sauces but also foods with near neutral pH like shrimp paste.

Propionates can naturally be found in a number of plants and certain cheeses. Their antimicrobial activities are mostly against moulds and they are of importance in the bakery industry. Just baked bread coming out of the oven is generally free from microorganisms, however, it will become a delicious food for moulds germinated from spores in the air. To prevent having furry black dots on breads which are kept at room temperature, propionates are often added to inhibit mould growth. 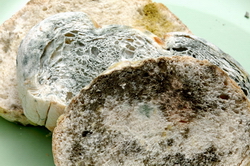 Nitrates occur naturally in the environment and plants and can be converted to nitrites by bacteria or enzyme actions. Synthetic nitrates and nitrites can be used as preservatives which can inhibit a range of bacteria. Of most practical importance is their ability to inhibit spore-forming bacteria including Clostridium botulinum which can survive heat processing applied to many cured meats. Clostridium botulinum can produce toxins which can cause a rare but serious illness called botulism.

As required by the Food and Drugs (Composition and Labelling) Regulations, the name or identification number of the food additive together with its functional class e.g., preservative should be labelled in the ingredient list if it has been added to prepackaged food .

Consumers can identify the food additives labelled with its identification number by making reference to the Consumer Guide to Food Additives published by the CFS.

In the next issue, let's move on to take a look at preservatives which are of special concern.