Crayfish and Rhabdomyolysis in the Mainland

The Chinese Centre for Disease Control and Prevention reported on 7 August 2010 that 23 patients in Nanjing with rhabdomyolysis were suffering from Haff disease, after consumption of crayfish (crawfish).

Rhabdomyolysis is a condition with muscle breakdown, which may result in kidney damage and other complications. Since 1924, the condition has been linked to consumption of freshwater fish and crayfish in Northern Europe, the former Soviet Union, United States, Amazonian Brazil and China, as both sporadic cases or in clusters. An unknown heat-stable toxin that accumulated in the implicated food is a possible cause. For the initial suspect, the "crustacean-washing powder" with oxalic acid as the main ingredient and sometimes used for enhancing the colour of the crayfish is not associated with rhadomyolysis according to the available evidence.

No similar case has been reported in Hong Kong to date. One shall not overindulge in crayfish and should seek medical attention immediately if feels unwell after consumption. 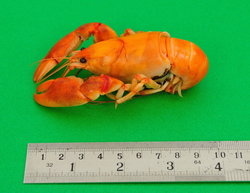