Review of Food Incidents in 2009

Since most of the foods available in Hong Kong are imported, effective surveillance for food incidents around the world is important to safeguard our food safety. The Centre for Food Safety (CFS) conducts daily surveillance of the media and internet for reports related to food incidents, makes assessment and carries out risk management actions

In 2009, around 99% of food incidents identified were non-local cases. Taiwan , USA and European countries accounted for most of them (66%). Other areas included the Mainland, Canada and Australia/New Zealand. Local food incidents constituted only about 1%.

Among all the food incidents, the most common food groups involved were vegetable, bean, cereal, fruit and their products which accounted for 29%. The second major food group involved was meat and poultry (23%). Other common food groups included aquatic products (8%), drink (8%), dairy products (5%) and snacks (6%) (Figure 1). No major change was observed comparing to figures in the past two years. 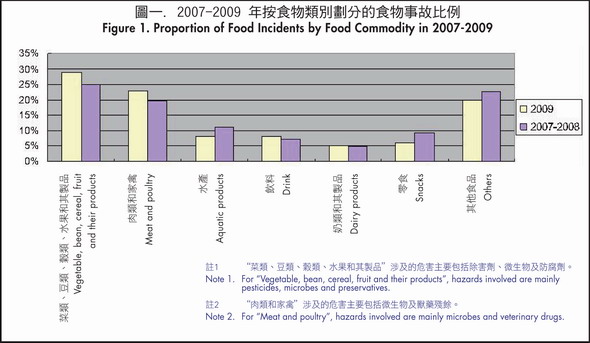 From Figure 2, it is obvious that among the three categories of food hazards, chemicals (e.g. preservatives, pesticides, colouring matters, sweeteners, heavy metals) were the commonest hazards identified (48%) followed by microbiological hazards (36%) (e.g. Salmonella, Listeria, Clostridium perfringens). The proportion of physical hazards (e.g. metal pieces, glass fragments) was 5%. No obvious change was noted within the past three years.

Upon identifying food incidents, CFS will consider several factors such as risk to the target consumers, local regulations and, communication with related health authorities, importers and distributors for availability of the concerned food product to decide on the most appropriate risk management actions.

If necessary, CFS will take actions such as request the trade to stop sale, conduct testings, issue warning letters, recall products etc. CFS will issue rapid alert to traders and inform them about the most updated situation, and also issue press release to advise the public to stop consuming the affected products if they are locally available.

Highlights of Important Food Incidents in 2009

A number of foods are of particular concern in relation to HAV. Bivalve shellfish like oysters, clams, mussels and scallops are filter feeders and will concentrate the HAV present in contaminated seawater. Fruits and vegetables for raw consumption (e.g. salad items, fresh vegetables like green onions and fruits like strawberries and raspberries) may also be contaminated with HAV in two major ways. They may get contaminated before harvest in farms through sewage contamination. First, possible sources of contamination are irrigation water or inadequately treated manure. Second, HAV can also enter food through food handlers and equipment any time from harvest, processing, packaging, storage, distribution and during final preparation before consumption. Food handlers can spread HAV through cross-contamination with affected foods, or by being HAV carriers themselves and with poor personal hygiene. HAV can spread through unclean hands and the infective dose is as low as about 10-100 virus particles.

After emergence of these incidents, CFS had been in close contact with the US authorities and also kept updating the trade about the situation. Since some of the products had been exported to HK, CFS immediately advised the trade to stop selling the affected products. Press releases were also issued to advise the public to stop consuming the products.

The Food Incidents Surveillance System has been shown to be very effective in detecting food incidents around the world. It enables CFS to take prompt actions on food incidents to manage the risks concerned. Responding to large scale food incidents such as peanut and pistachio products contaminated with Salmonella in the US in 2009 has enriched our experience and improved our readiness to manage large scale food incidents. With the gain in experiences, together with continuous enhancement of our food safety regulations, CFS will be better equipped to meet with new challenges in the coming years to safeguard food safety in Hong Kong.