Hepatitis A Virus in Semi-dried Tomatoes

On 7 November 2009 , the Department of Health of New South Wales in Australia issued a press release as a precautionary measure, warning people not to eat non-prepackaged semi-dried tomatoes unless thoroughly cooked following outbreaks of hepatitis A in Australia . The state of Victoria , where most of the cases concentrate, also requested enhanced traceability and processing steps for all semi-dried tomatoes. Recent evidence in Australia suggested an association between the hepatitis A outbreaks and semi-dried tomatoes. The Centre for Food Safety (CFS) has been communicating closely with the Australian authorities on the latest development of the incident. No affected products have been found in Hong Kong . 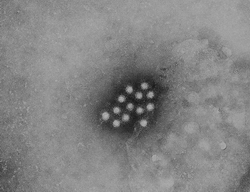 Hepatitis A is a liver disease caused by hepatitis A virus (HAV). It may cause symptoms like an abrupt onset of fever, malaise, anorexia, nausea, abdominal pain, dark urine and jaundice. The severity of disease, ranges from a mild illness lasting one to two weeks to severe one lasting for months, increases with age. Infected young children are often without symptoms. The death rate is generally low and most people recover from the illness completely. HAV is heat sensitive and can be destroyed through thorough cooking of food.

As human is the reservoir, HAV can transmit from person-to-person via the faecal-oral route. The carriers can often spread HAV among close contacts. Furthermore, improper disposal of human waste can cause contamination of both drinking water and shellfish production areas. HAV has worldwide presence and is very common in many parts of the world where there is inadequate personal hygiene and environmental sanitation. The spread of HAV in the population of more developed regions will cause more outbreaks as most of the population is not immune.

A number of foods are of particular concern in relation to HAV. Bivalve shellfish like oysters, clams, mussels and scallops are filter feeders and will concentrate the HAV present in contaminated seawater. Fruits and vegetables for raw consumption (e.g. salad items, fresh vegetables like green onions and fruits like strawberries and raspberries) may also be contaminated with HAV in two major ways. They may get contaminated before harvest in farms through sewage contamination. First, possible sources of contamination are irrigation water or inadequately treated manure. Second, HAV can also enter food through food handlers and equipment any time from harvest, processing, packaging, storage, distribution and during final preparation before consumption. Food handlers can spread HAV through cross-contamination with affected foods, or by being HAV carriers themselves and with poor personal hygiene. HAV can spread through unclean hands and the infective dose is as low as about 10-100 virus particles.

HAV can survive well in the environment and may outlast the shelf life of fresh fruits and vegetables. As washing produce with potable water can only remove some of the virus, infection is still possible if the contamination level is high.

From 1998 – 2007, the Centre for Health Protection found that the number of hepatitis A reported (from all causes) shows a declining trend. The number of cases dropped from approximately 500 cases in 2000 to less than 100 cases each year in 2005 to 2007. Over 90% of the cases are acquired locally and the virus is more active during winter and spring. No hepatitis A outbreaks associated with vegetables was identified locally. It may partly be due to the long lag time between infection and the onset of symptoms and therefore often no food remnants are available for confirmation through laboratory analysis.

Prevention of Food-borne Hepatitis A

To reduce the chance of spreading hepatitis A through food, one should exercise precaution. As for semidried tomatoes, it is safer to cook them thoroughly before consumption so that the HAV, if present, is destroyed.

As food may get contaminated in any point from farm to table, it is especially important to choose food from reliable sources for ready-to-eat (RTE) food, where no further cooking will be done to destroy any HAV present before consumption. To prevent cross-contamination, one can (1) maintain good personal hygiene by washing hands properly before, during and after handling food; (2) using separate set of utensils for handling raw food and RTE food; (3) separate RTE food like semi-dried tomatoes from raw food when storing in refrigerator by covering or boxing it and keep it above any raw food. Thorough cooking, wherever applicable, remains the final critical step to destroy HAV.