Last month, the Centre for Food Safety (CFS) released the Risk Assessment Study on Aluminium in Food, which revealed that high levels of aluminium were commonly found in a range of food products, probably a result of using aluminium-containing food additives. Items containing high aluminium levels included jellyfish, steamed bread/bun/cake, and some bakery products such as muffins, pancake and waffle. 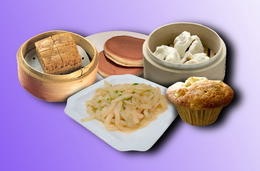 Examples of items that were found with high levels of aluminium

The study was conducted in the light of the latest evaluation by the Joint Food and Agriculture Organization/ World Health Organization Expert Committee on Food Additives (JECFA) that the safe intake level (i.e. provisional tolerable weekly intake (PTWI)) was lowered by seven folds to 1 mg/kg body weight (bw) for aluminium. Recent study revealed that dietary exposure of some Europeans may exceed this new PTWI. Food authorities in Canada, Japan and Australia are also examining their local situation.

Aluminium-containing food additives have been used in food processing with a variety of functions for over a century and are permitted to be used in many countries such as the United States, the European Union, Australia, Japan and Mainland China. They are commonly used as raising agent in steamed cake/bread and bakery products, anticaking agent in powder mix, colouring matter in candy-coated confectionery, and in the East, as firming agent in jellyfish. Food with aluminium-containing food additives is regarded as the main dietary source of aluminium of the general population.

Moreover, aluminium levels may vary widely among bakery products, depending on whether aluminium-containing food additives are used in such products and their amounts added. Bakery products with low to high levels of aluminium as revealed by the study are grouped in the table below.

Remarks: Levels of aluminium are drawn from a limited number of samples tested in the study.

Average dietary exposure to aluminium of the local population revealed by our study was 0.6 mg/kg bw/week (i.e. 60% of the PTWI). Thus, it does not warrant changes in usual dietary advice for average individuals, but people, particularly children, who regularly consume food using aluminium-containing food additives such as steamed bread/bun/cake, some bakery products and jellyfish, may be of higher risk. Nevertheless, occasional exposure above the PTWI would not have health consequences provided that the average intake does not continuously exceed the PTWI.

Collaboration with Trade to Reduce Aluminium Exposure for the Population

The CFS has worked closely with the trade to devise the Guidelines on the Use of Aluminium-containing Food Additives and urges the trade to adopt measures stipulated in the Guidelines to reduce the aluminium content in food. On the other hand, the Codex Alimentarius Commission is reviewing the standards of aluminium containing food additives with a view of lowering the aluminium exposure in general population. The CFS will continue to monitor the situation and the international development.