On 29 May 2008 , the Centre for Food Safety (CFS) released the latest food surveillance results. Three samples of pasteurised milk of the same consignment were detected with coliform organisms which exceeded the microbiological standard in the law for milk or milk beverage. The CFS has informed the relevant authority and importation of the products has been suspended; the CFS will step up surveillance of the product concerned upon the resumption of importation. In this article, we shall focus on this particular group of bacteria and their signifi cance in milk as well as the microbiological standard for milk. 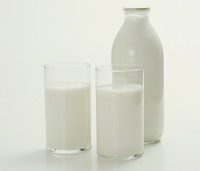 Milk is nutritious for human, but also for bacteria. In order to kill pathogens in raw milk and to extend shelf life, processes called pasteurisation and sterilisation (sterilization method and ultra-high-temperature(UHT)method) are often used. Pasteurisation uses temperature below boiling point to treat raw milk for a specific period of time to eliminate most microorganisms, while the nutrition and taste are not significantly affected. Since pasteurisation does not kill all microorganisms, pasteurised milk must be refrigerated. On the other hand, longer shelf-life can be achieved with UHT treatment which sterilises the milk at a very high temperature in a very short period followed by sealing it in sterilised containers. UHT-treated milk can be stored in the sealed containers without refrigeration for months. Conditions for sterilisation method (treatment at 100°C for more than 25 minutes) are more severe than pasteurisation, i.e. higher temperature and longer time. While pasteurisation of milk has little effect on nutrition and taste, sterilisation method may cause changes in nutrition and taste.

Subject to different heat treatment method employed, there are different microbiological standards under the Milk Regulation (Cap. 132AQ) for the milk and milk beverage:

Detection of Coliforms in Milk

Coliforms, which are often used to monitor the quality of milk, are not a single species of organism. They are a group of gram negative rod-shaped bacteria that have similar biochemical characteristics – being able to ferment lactose with the production of acid and gas within 48 hours at 35°C and grow with or without oxygen. They are usually present in small number in raw milk, meat, poultry or other raw foods. Coliforms count is simple and easy to conduct, hence it can be used as an hygienic indicator to reflect the general microbiological quality in routine test. As coliform organisms can be easily killed by heat, these bacteria can also be used as an indicator of heat treatment failure as well as post heat treatment contamination.

In the past, coliforms have been used as an indicator for pathogens, but they are no longer recommended for this purpose due to the fact that coliform organisms are present as normal inhabitants of soil and water, not just specifically from faecal contamination. Some people may wonder if there is co-relationship between the presence of pathogenic bacteria from faecal source, especially Salmonella and Shigella species, and the presence of coliforms. As mentioned before, coliforms are not specific enough for that purpose and it is important to note that these two bacterial species are not coliforms.

In the milk sample concerned, coliform organisms were detected, but it does not necessarily mean that there were pathogenic bacteria. Presence of coliforms means there may have been problems in the efficiency of heat treatment or re-contamination after heat treatment. In these cases, the food manufacturer is required to check for process failure and ensure product safety.

Control measures should be proportional to the magnitude of the problem. In the above case, the importer was asked to cease sale of the affected batch of milk and conduct investigation at the exporting end. Consumer level recall was considered unnecessary in view of the low health risk of the product. The practice was in line with that of other food safety authorities.