From the "Belgium Dioxin Crisis" happened almost a decade ago that unusually high level of dioxins was found in dairy and poultry products in Belgium , to the recent food incident on dioxins contamination of mozzarella cheese in Italy , concerns over toxic contaminants in food have been raised from time to time. Dioxins, in fact, belong to a group of organic contaminants, namely "Persistent Organic Pollutants (POPs)", that are persistent in the environment and pose significant threats to human health and the environment. In this issue of the Food Safety Platform, we would present an overview of POPs and in the next issue their food safety implication.

POPs are organic compounds that were used as pesticides and industrial chemicals, or are by-products of human activities. By definition all of these chemicals share four properties:

Why are POPs Present in Food?

Owing to their special characteristics, POPs can be present anywhere in the world, accumulate in the fatty tissue of living organisms and gradually concentrate as organisms eat others as they move up the food chain. Their levels can be magnified up to many thousands of times higher than background levels in the fatty tissues of organisms at the top of the food chain, such as fish, predatory birds and mammals. Foods of animal origin, i.e. meat, poultry, fish, egg, milk and their products, are likely to have higher levels of POPs.

Illustration: How POPs ended up in food 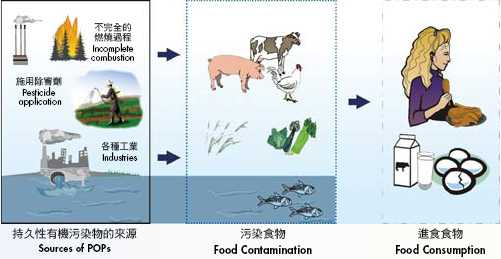 What have been Done in the International Arena?

In 2001, the world's governments adopted an international treaty, namely the Stockholm Convention on Persistent Organic Pollutants , which aims at restricting and ultimately eliminating the production, use, release and storage of POPs. Twelve POPs of the greatest concern have been identified. These 12 POPs include:

Diet has been considered as the major route of POP exposure for the general population. We would talk about the potential food safety implication of POPs in the next issue.

The 12 POPs under the Stockholm Convention