Review of Food Incidents in 2007

Food incidents refer to the incidents or events which have potential food safety implications and are actively evaluated by the Centre for Food Safety (CFS). They include reports on food safety issues by food authorities and media agencies outside Hong Kong which may have local implications, as well as local food safety issues with wide media coverage and significant public concern. The CFS monitors reports from a wide range of sources, assesses their local significance and takes follow-up actions to address any food safety risk and concern that may be identified.

Review of Food Incidents in 2007

With regard to the types of food concerned, food incidents related to produce and their products were the commonest (26%). The other major food groups involved were meat and poultry (19%), aquatic products (12%), multiple food items (11%) and snacks (10%) (Figure 2). 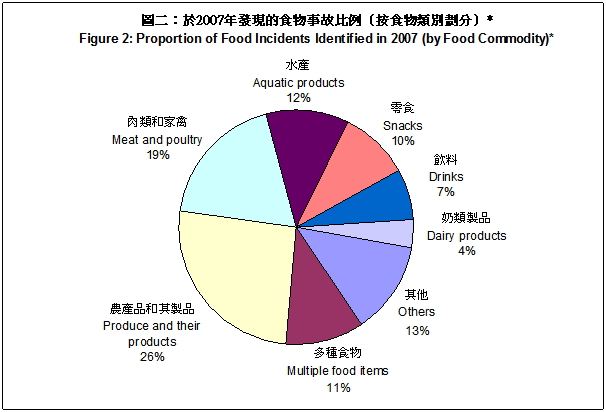 From Figure 3, it is obvious that chemicals (e.g. preservatives, pesticides, colouring matter, sweeteners, heavy metals) were the commonest hazards identified (53%). Examples of such food hazards included trace amounts of non-permitted colouring matter found in rice dumpling samples and high level of paralytic shellfish poisoning toxin in a scallop sample. Microbiological agent (e.g. bacteria, virus) was the second commonest hazard (27%). For instance, possible contamination with Vibrio parahaemolyticus and norovirus was reported in some batches of oysters in the USA . The proportion of physical hazards (e.g. metal pieces, glass fragments) was 6%. Other hazards such as mixed hazards and quality issues constituted about 15%. 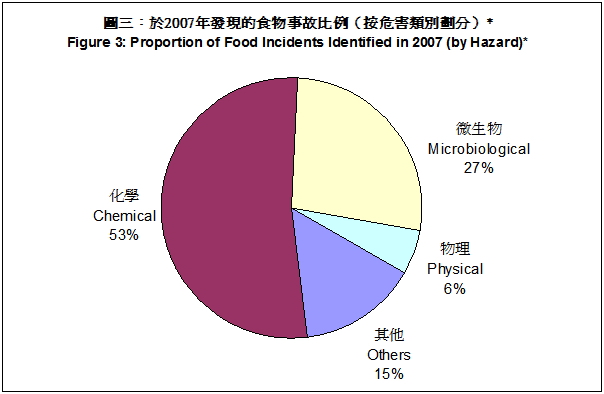 Depending on the public health risk of the food incidents, the CFS has taken appropriate follow-up actions such as obtaining further information from relevant authorities, alerting traders, conducting sales check, sampling and testing of the products concerned, and issuing press releases as well as food alerts. In 2007, about 130 alerts to traders and some 30 press releases were issued.

Since the majority of foods in Hong Kong are imported, traders should ensure that their foods are sourced from reliable suppliers. The CFS will alert and communicate with traders, and make timely announcement to the public in case the food incidents identified have potential local impact. Food safety in Hong Kong can be achieved through tripartite collaboration among the Government, food trade and consumers.