While warmer temperatures make it easy for bacteria to multiply quickly, foodborne diseases can still happen in winter. Near the Lunar New Year, cooking in bulk for celebration is very popular. However, as bulk cooking involves a significant amount of food, poor hygiene practices and a lack of kitchen space can raise the risk of temperature abuse as well as cross-contamination between raw and cooked food, which may bring unwanted food bugs to the table.

Wintertime is a great time of the year to have ‘winter warmers’ such as poon choi when we host large gatherings. These dishes are often prepared through bulk cooking ahead of time, due to the large number of portions required. Poon choi contains various food ingredients and requires complicated and long preparation procedures such as cutting, marinating, precooking and cooling and finally re-heating. If the food is left at room temperature for too long after precooking, foodborne pathogens can multiply and some can even produce heat-stable toxins which are not readily eliminable by reheating. Hence, it is important to store food properly by storing precooked ingredients at 4°C or below to prevent the formation of toxins, cool down the precooked ingredients by dividing into small portions, placing in shallow containers or placing in ice bath. Reheating foods thoroughly to the core temperature of 75°C or above, and keep hot food above 60°C if it is not consumed immediately. Do not leave reheated food at room temperature for long, and discard it if held at room temperature for more than four hours. Of note, heat from the heat source may not be evenly distributed in a large poon choi during reheating, therefore requiring more time to bring poon choi to a boil before eating. 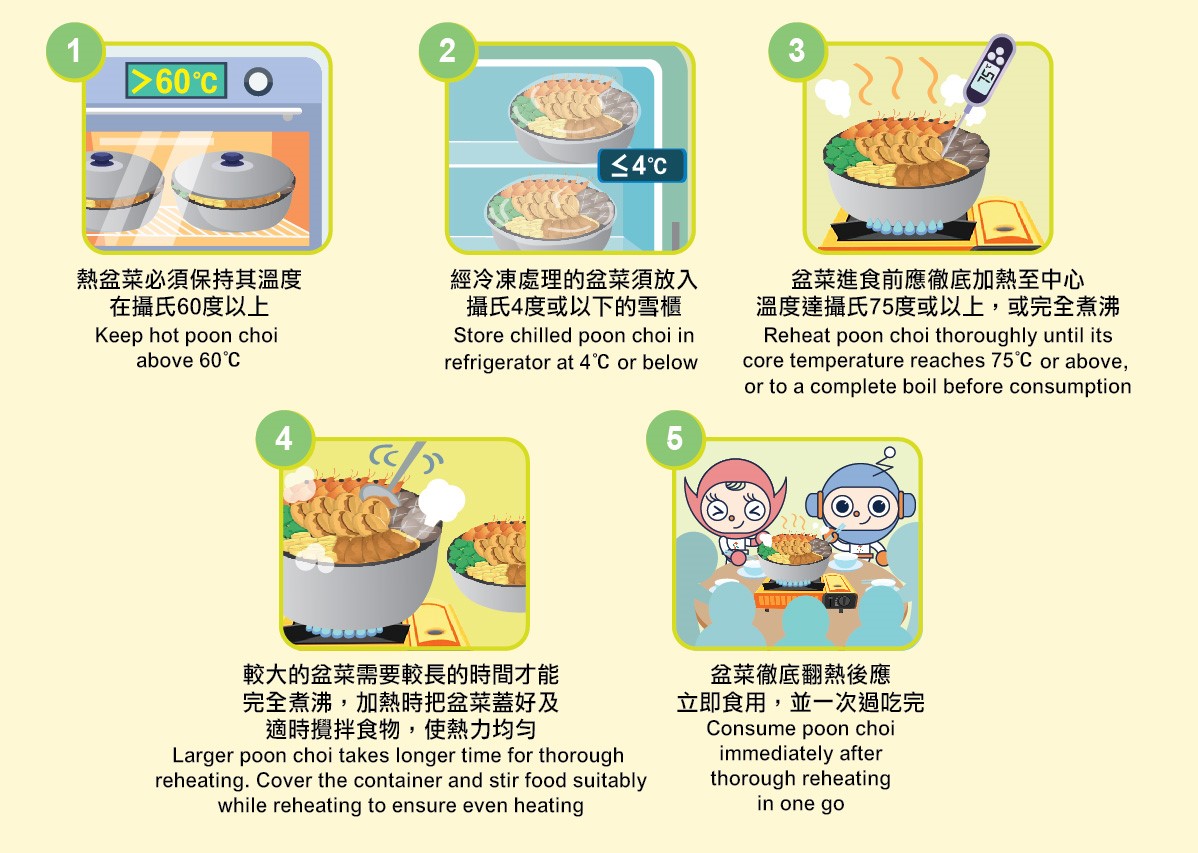 Hotpot is also often served at social events and gatherings in winter. Hotpot is made by putting a heat source under a pot of soup that is boiling. Meat, vegetables, mushrooms, and processed foods are cooked in the pot and eaten with a variety of dipping sauces.  Raw and cooked ingredients are often put next to each other for ease of use. This makes it more likely that bacteria from the raw ingredients will get into the cooked food, imposing the risk of cross contamination. Hence, it is preferable to use different sets of chopsticks and utensils to handle raw and cooked food separately. Avoid putting too many dishes on the table to minimise food-to-food cross-contamination.

Inadequate cooking is another issue that frequently happens in hotpot, especially if the person is not experienced in cooking. Undercooked food may contain harmful bacteria and viruses that are not killed by cooking and can subsequently cause food poisoning. Whenever water or soup is added, food should be picked up only after it is boiled thoroughly. Seafood such as shellfish should be boiled for at least five minutes and it should be ensured that all foods are cooked thoroughly before consumption. Some people may use beaten raw eggs as a dipping sauce for hotpot, but raw eggs may contain Salmonella that can cause food poisoning. The public is not advised to eat raw eggs or dip cooked food into any mixed sauce of raw eggs.

Large holiday meals could leave you with leftovers, such as steamed puddings and fried dumplings, to dig in for days. For the sake of food safety, all perishables should be refrigerated within two hours of being cooked or cooled, and discard items that have been left out for longer than four hours. To minimise spoilage, leftovers should be kept in clean and airtight containers, and refrigerated within two hours of finishing preparation. All leftovers should be reheated thoroughly with the core temperature of food reaching at least 75°C, and they should only be reheated once. Take note of the expiry dates of the food items before consumption. Food beyond its “use by” date should be discarded; be wary of the quality of food beyond the “best before” date. A ‘sniff test’ is not an appropriate method for testing if food is safe to eat, as food can look and smell fine even after the “use by” date has passed. Any leftovers that have been kept in the refrigerator for more than three days should be disposed of.

To enjoy meals safely and healthily, whether at home or in restaurants, follow “the Five Keys to Food Safety” and eat a balanced diet. Consume more vegetables high in dietary fibre and avoid foods heavy in fat, sugar, and sodium.