In recent decades, antimicrobial resistance (AMR) microorganisms, also called "superbugs", have become a looming threat to public health. These resistant microorganisms can spread through food due to misuse of antibiotics which are used in humans and animals. AMR is of concern as it leads to more difficulties in treating infections and preventing death. As such, it prompts the need for action to improve food safety and coordination of action among food, humans and the environment.

Foods that have been prepared so they can be consumed without any additional cooking are called "ready-to-eat" foods. Baked bread, pasteurised milk and canned products are considered ready-to-eat as they have been heated to certain temperature to kill bacteria and can be consumed safely with or without further heat treatment.

However, there are some other ready-to-eat foods that are eaten in raw or undercooked state, such as sashimi, salad greens and undercooked meat. They are intrinsically high-risk as there is no or inadequate heat treatment to eliminate the microorganisms present that can pose risks to human health. These raw or undercooked ready-to-eat foods are also associated with the risk of contracting "superbugs". Superbugs are microorganisms that have developed AMR to stop a wide range of antimicrobial agents, antibiotics for example, from working against them. Consequently, they make infections harder to treat.

How AMR spreads to humans

In the local context, the Pilot Survey for AMR Microorganisms in Food in Hong Kong conducted by the Centre for Food Safety (CFS) in 2019-20 revealed that 15.1% of the ready-to-eat food samples collected were detected with "superbugs". Such findings should act as a reminder to people on the risk of contracting "superbugs", among other bacteria that cause food poisoning from ready-to-eat food. Currently, the CFS is conducting AMR surveillance in food, including ready-to-eat food like sashimi and salads.

How to tackle AMR in Ready-to-eat Food

Thorough cooking before consumption is the most effective way to kill "superbugs" that may be present in food. Consumers should however be aware of the inherent risk of contracting "superbugs" when they eat certain raw and undercooked ready-to-eat food. Susceptible populations such as pregnant women, infants and young children, the elderly and people with weakened immunity (i.e. people with chronic diseases or those on antibiotics treatment, antacid and long-term steroids or drugs given to prevent transplant rejection, etc) are of higher risk and should therefore avoid eating raw and undercooked ready-to-eat foods.

When preparing ready-to-eat foods, good food hygiene should be practised which includes: 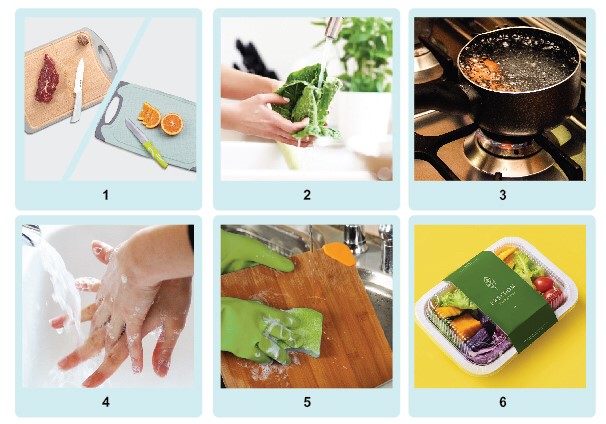