Heat-stable Toxins from Bacillus cereus and Staphylococcus aureus:
Why Cooked Food Should Not Be Left at Room Temperature for Too Long

Recently, fried rice samples from a local restaurant were found to contain  excessive amounts of Bacillus cereus (B. cereus). While cooking and reheating generally makes foods safe, subsequent improper handling of cooked food may create opportunities for bacteria like B. cereus and Staphylococcus aureus (S. aureus) to form heat-stable toxins, causing food poisoning. Now let us look at how cooked food allows bacteria to thrive and how we can avoid this from happening.

Improper Handling after Cooking Can Put Food at Risk

B. cereus and S. aureus are widespread in our surroundings and are normally present at low amounts in food, which does not always result in food poisoning. These bacteria have to grow to high levels to produce sufficient toxins in foods to make people sick. Mishandling of food after cooking will create such an opportunity, such as prolonged storage under ambient temperatures.

While cooking is effective to kill S. aureus and vegetative cells of B. cereus, B. cereus can exist as spores which are resistant to normal cooking temperature the latter's spores are resistant to heat and can only be eliminated by high-temperature treatment, say 121°C for 3 minutes. Paradoxically, the heat from cooking not only makes the spores grow into vegetative cells, but also creates an environment conducive to cell growth by killing off other competing microorganisms. Similarly, S. aureus, if contaminating food after cooking, can thrive well in the cooked food in the absence of other microbes. Toxins will be formed during multiplication of these bacteria, which cannot be eliminated by reheating. Hence, food should be handled properly after cooking to reduce the risk of toxin production by these bacteria.

Minimising contamination by these bacteria is crucial in the first place. Clean food preparation areas prevent contamination from the environment, including spores of B. cereus. When preparing food, food handlers should ensure good hygiene practices, such as frequent hand washing and cleaning food contact surfaces as they go. S. aureus is commonly present inhuman nasal passage, throat, hair and skin. Masks and hairnets can be used while handling prepared food to prevent S. aureus contamination from other body parts, while waterproof adhesive dressings should be applied for covering hand wounds.

Limiting bacterial growth after cooking is also important for avoiding toxin-forming microorganisms, particularly when B. cereus spores in food cannot be efficiently eliminated. Freshly prepared food should be eaten as quickly as possible; otherwise, it should be held at temperatures over 60°C for hot holding, such as fried rice prepared ahead of time for sale during lunch hours. Freshly produced food may also be cooled down before serving cold, such as soybean milk, or for additional processing, such as making steamed rice less wet for fried rice. In these instances, cool food from 60°C to 20°C in two hours or less, and then from 20°C to 4°C in four hours or less in a fridge (See Figure 1). These time limits help prevent prolonged exposure to ambient temperature and, therefore, dangerous bacteria growth. 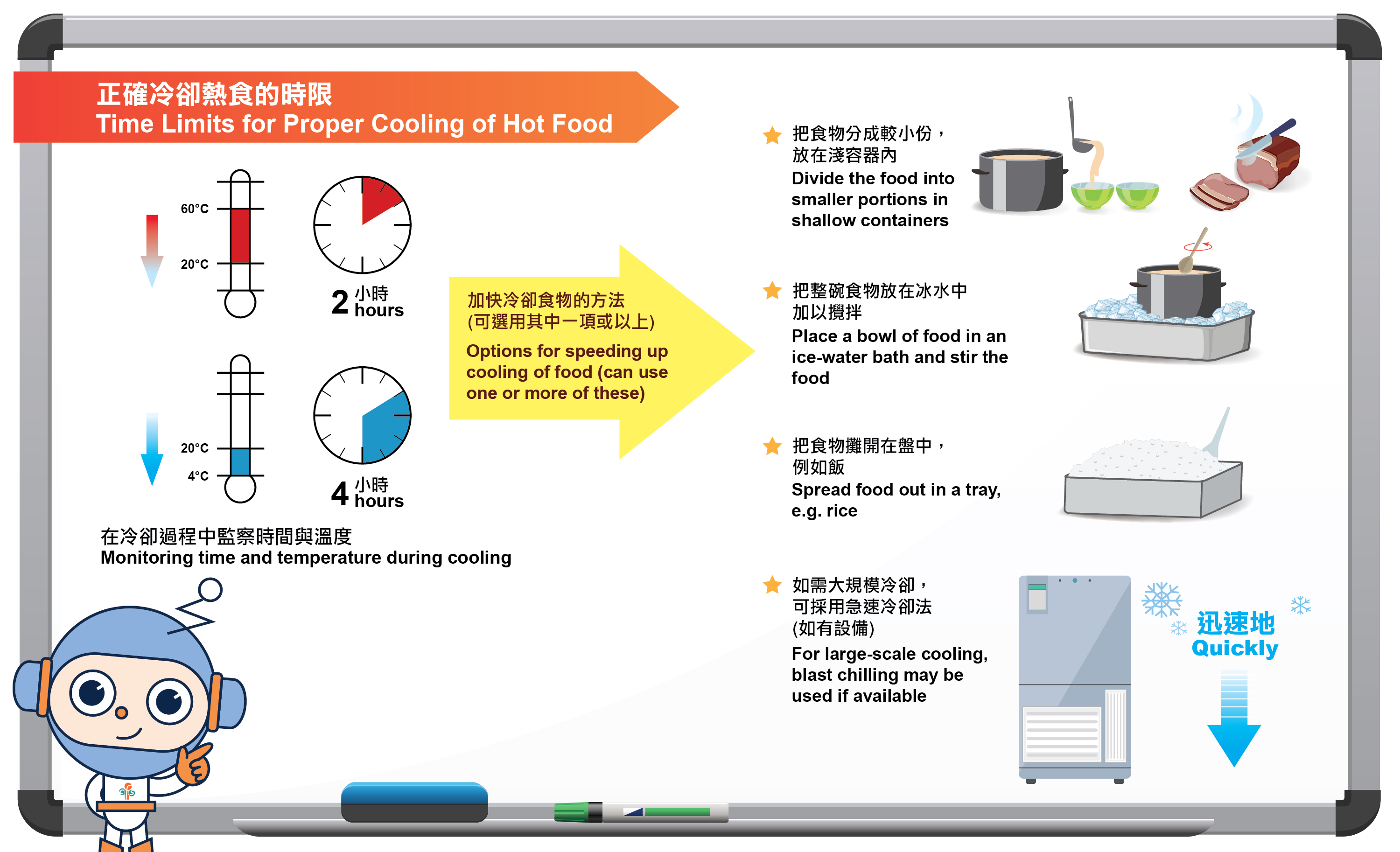