A single case of classical bovine spongiform encephalopathy (BSE) had been confirmed on a farm in Somerset in England by the UK Animal and Plant Health Agency on 17 Sep 2021. This article examines classical BSE from a broad perspective including the various transmissible spongiform encephalopathies (TSE) in other animals and humans, the disease characterisation and public health concerns. It also details the full suite of measures implemented to prevent this disease from being transmitted to people via contaminated beef.

TSE in Animals and Humans

There is a group of diseases known as transmissible spongiform encephalopathies (TSE), or prion diseases, affecting both animals and humans.  In cattle, this form of TSE is known as BSE, or commonly as “mad cow disease”.  Two forms can be distinguished: the classical BSE which occurs in cattle after ingesting prion contaminated feed, while the atypical BSE is believed to occur spontaneously in all cattle populations.  Other forms of TSE include scrapie in sheep and goats, chronic wasting disease (CWD) in deer, and Creutzfeldt-Jakob disease (CJD) and “Kuru” in humans.

BSE is a progressive, fatal disease of the nervous system of cattle that is caused by the accumulation of an abnormal protein called “prion” in nervous tissues. BSE has a long incubation period between two and eight years. Affected animals may display changes in temperament (nervousness or aggression), incoordination and difficulty in rising. Following the onset of clinical signs, the animal’s condition deteriorates rapidly, usually in 2 weeks to 6 months, until it either dies or is destroyed.

Classical BSE is transmitted to cattle through the dietary intake of prion contaminated feed.  It has been proven that certain tissues known as the specified risk materials (SRM) of infected animals, are most likely to contain and therefore transmit the BSE prion.  According to the World Organisation for Animal Health (OIE) Terrestrial Animal Health Code, these tissues include brain, eyes, spinal cord, skull, vertebral column, tonsils and distal ileum. 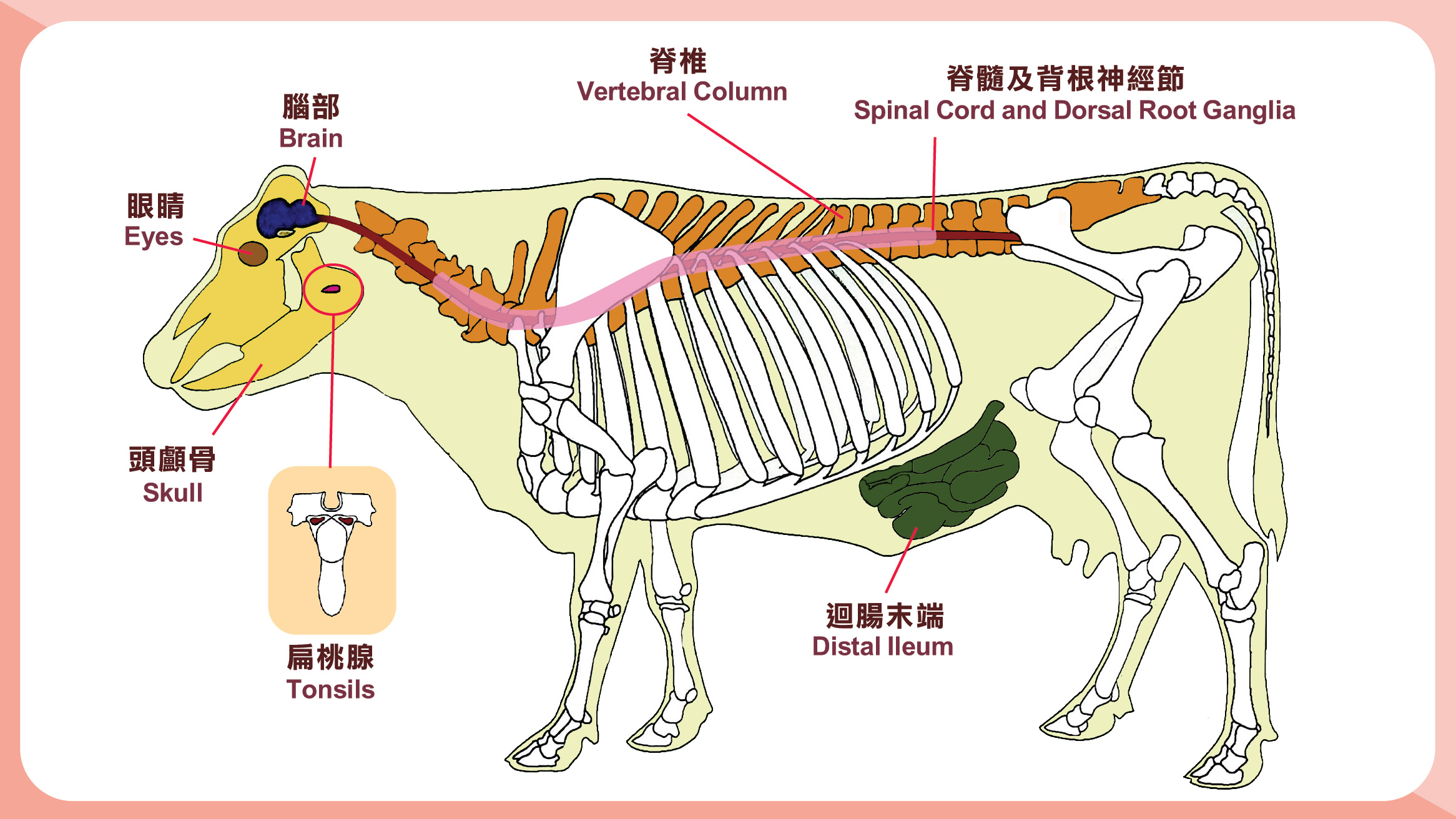 The infectious prion is resistant to inactivation procedures such as heat treatment during commercial production and is difficult to be destroyed or denatured, which means that it may not be destroyed in the rendering process used to convert waste animal tissue to stable usable feed protein material.

Classical BSE was first detected in 1986 in the UK and further reported in many other countries.   The highest number of cases worldwide was reported in 1992, with more than 37,300. With the implementation of control measures, such as feed bans (exclusion of SRM contaminated feed), there have been fewer than 10 cases annually worldwide since 2013. There is currently no treatment or vaccine against BSE.

BSE is considered zoonotic due to its epidemiological link with the emergence of variant Creutzfeldt-Jakob disease (vCJD) in humans. It has been linked to the consumption of contaminated beef products derived from BSE-infected cattle. However, dietary exposure to red meat (i.e. deboned skeletal muscle) and milk and milk products is considered safe.

To prevent human and animal infection, and the recycling and amplification of prions, many countries have enforced the systematic removal of SRM tissues that might contain a significant amount of BSE infectivity from bovine carcasses. This measure, together with the ban on the use of processed animal proteins in feed (i.e. ruminant-to-ruminant feed ban), have been demonstrated to be strongly efficient in controlling exposure to BSE agents. The OIE provides comprehensive guidance on the international trade of beef and beef commodities and recognition of BSE risk status (negligible, controlled and without official BSE risk status) with corresponding trade restrictions, with a view to safeguarding public health and preventing the spread of BSE.

Beef is imported into Hong Kong in accordance with the Imported Game, Meat, Poultry and Eggs Regulation (Cap. 132AK).  Beef should be imported from country or areas that meet requirements on public health measures in eradication and control of BSE, regulatory implementations, veterinary services and OIE official BSE risk status.  Each consignment is accompanied with a health certificate validating the required conditions, thereby ensuring full confidence in the food safety of imported beef and beef products in Hong Kong.