A popular seafood enjoyed by connoisseurs worldwide, raw oysters are also an infamous culprit of food poisoning. While the shellfish, often served uncooked, continues to appear in the records of local foodborne disease outbreaks, the Centre for Food Safety notices that some importers re-immerse imported raw oysters into saltwater tanks before sale. Such improper handling of oysters intended for direct consumption was implicated in several food poisoning cases this year. With the intention of extending shelf-life of the shellfish, the temporary storage method may otherwise pose additional food safety risks to consumers.

Being a filter feeder, oysters can filter litres of water hourly. During feeding, both suspended food particles and disease-causing microorganisms, such as bacteria (e.g. Vibrio parahaemolyticus and Vibrio vulnificus) and viruses (e.g. norovirus and Hepatitis A virus) from the seawater, are collected and concentrated inside the organism. As such, consuming oysters raw without thorough cooking might risk direct intake of these microorganisms. In terms of food safety, eating raw oysters is not recommended, particularly for susceptible individuals.

To certain consumers' preferences, oysters are eaten raw or lightly cooked nevertheless. In order to strike a balance between market demand and customers' safety, oyster farms often strictly follow guidelines stipulated by different jurisdictions. For instance, in the European Union (EU), only oysters raised from Class A production area (i.e. with the least bacterial count) can be harvested for direct consumption, coupled with additional purification procedures sometimes to minimise the microbiological contamination. Despite all safety measures in place, occasionally imported raw oysters can still be contaminated with pathogens, ending up with sick diners and food recalls.

Wet storage refers to the practice of storing live shellfish temporarily by submerging them under water or heavy spraying. In its Code of Practice for Fish and Fishery Products, the Codex Alimentarius (Codex) specifies that live bivalve molluscs must not be re-immersed in or sprayed with water after they have been packaged and left the distribution centre. Re-immersion can ruin the end-product specifications of raw oysters. While the temperature of the saltwater tank is usually not low enough to suppress bacterial growth, mixing of raw oysters from different batches in the same water tank facilitates cross-contamination between shellstocks. Instead of prolonging the shelf-life of oysters intended for direct consumption, traders should store them at a controlled, uninterrupted cold chain for the shortest time possible to secure food safety. 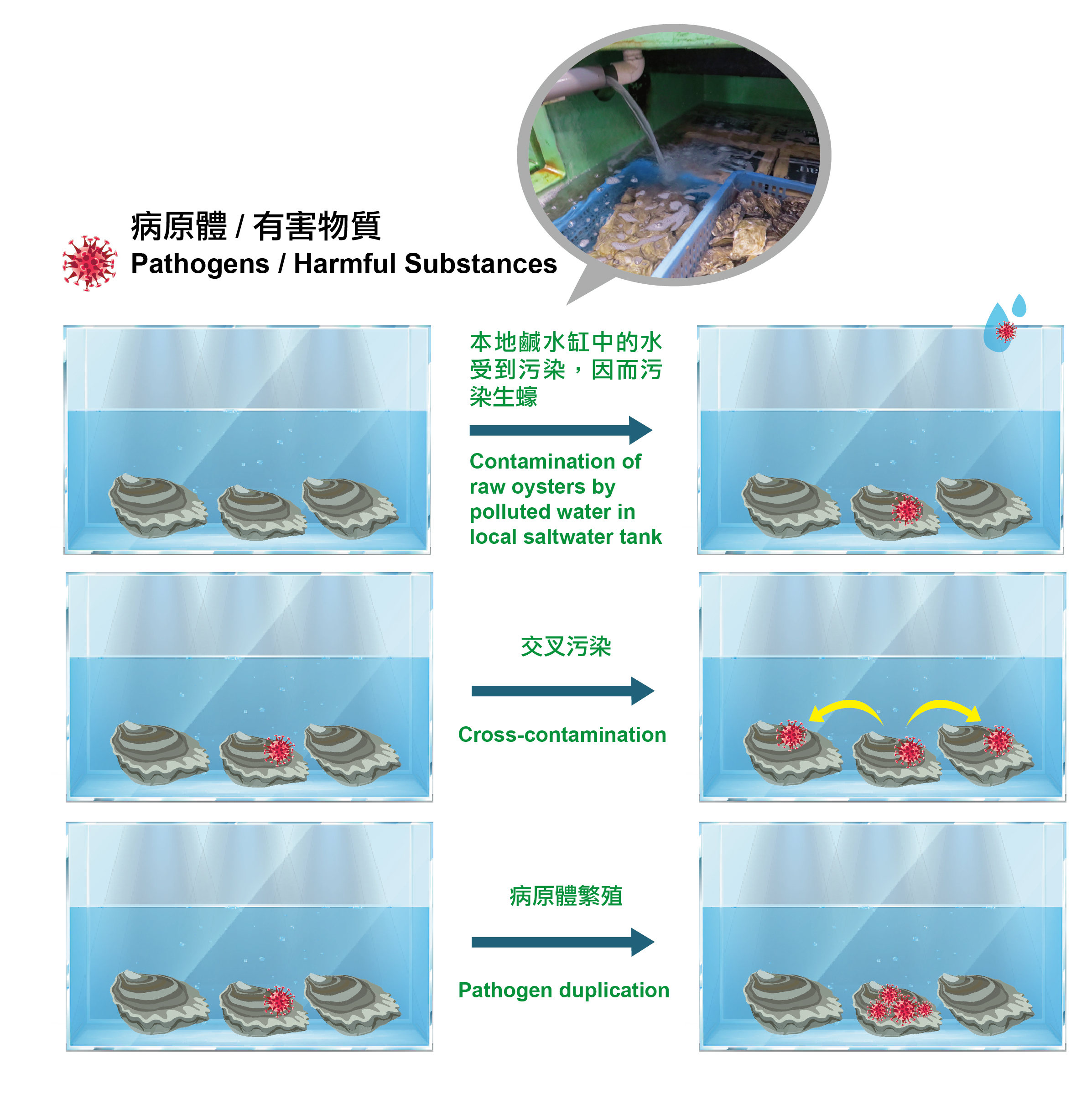 Wet storage of imported raw oysters is not in line with the international requirements. Food authorities of oyster-exporting countries such as France, Ireland and Australia are against wet storage of oysters after export. In the EU, re-immersion of oysters following packaging is prohibited. In Hong Kong, it is a licensing condition of the restricted food permit issued by the Food and Environmental Hygiene Department that oysters to be eaten in raw state shall be kept at a temperature between 0°C and 4°C. Hence, keeping oysters at higher temperature will breach the aforesaid condition and may affect the validity of permits / licences. Furthermore, wet storage could tamper the quality of raw oysters to the extent that such quality may not be comparable with the food standards endorsed by the health certificate and recognised by the authorities of exporting countries as fit for human consumption. For the sake of public health and the quality of raw oysters, traders should observe these rules.