The Centre for Health Protection reported a total of four cases of scorpion stings while handling langsat, a type of tropical fruit from Southeast Asia , between January and October 2007. The four affected persons suffered from swollen and numb fingers after being stung by scorpions and required treatment at hospitals. At least two of the cases involved scorpion of species Lychas mucronatus (also known as Chinese Striped Bark Scorpion), which is common in Southeast Asia .

Scorpions may lurk behind the tightly-packed langsat and sting when one handles the fruit. Consumers should pay attention when handling langsat and are advised to hold the stalk of the bunch and shake it vigorously under water before consumption. Although not all scorpion stings are toxic, anyone who is stung by scorpion should seek medical attention as soon as possible. Furthermore, washing or fumigation after harvesting can also help to remove some of the arthopods that may be hiding among fruits. 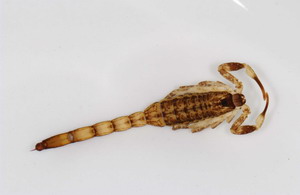