The following article, being the third in this series on "Metallic Contaminants in Food", will focus on cadmium. The various sources from which people are exposed to cadmium, as well as the measures that people may take to reduce their exposure to this particular metal will be discussed.

What is Cadmium? Where does it Come from?

Cadmium is a metallic element that occurs naturally in the Earth's crust. Pure cadmium is soft and silver-white, but the metal is usually present in the environment as a mineral combined with other elements such as oxygen, chlorine or sulphur. Cadmium does not break down in the environment, but it can change into different forms and bind to soil or dissolve in water to varying degrees.

Cadmium has a number of industrial applications such as electroplating, pigment production, manufacture of plastic stabilisers and pigments, nickel-cadmium batteries and electronics, etc. Fertilisers produced from phosphate ores, industrial operations such as mining and refining are important sources of environmental contamination. The largest airborne sources of cadmium in the environment originate from the burning of fossil fuels such as coal, oil and the incineration of municipal waste. Cadmium particles in air can travel long distances before coming down to the ground as dust, or along with rain or snow.

How are People Exposed to Cadmium?

People can inhale cadmium from work environment containing cadmium fumes and dust, such as from the smelting and refining of metals, and from the air in plants where cadmium products are made. For the general population, food is the main source of cadmium exposure. Crops that are grown in cadmium-contaminated soil, irrigated with cadmium-contaminated water or applied with cadmium-containing fertilisers may have increased concentrations of cadmium, as may organ meat (kidney and liver) from land animals grazing on pastures or fed on feedstuff containing the metal. Fish and shellfish will take up cadmium when inhabited in contaminated waters.

Illustration: Examples of food items that may have high cadmium contents: shellfish 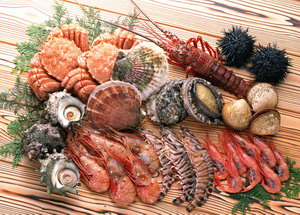 Cigarette smoking is an additional source of cadmium exposure. Smoking 20 cigarettes per day may contribute 1 to 4 μg of cadmium, and smokers may double their daily cadmium exposure as compared with non-smokers.

What are the Effects of Cadmium on Health?

While acute toxicity of cadmium due to dietary exposure is very unlikely, chronic exposure to cadmium would affect the kidney function. The International Agency for Research on Cancer of the World Health Organization considered that there was sufficient evidence of carcinogenicity of cadmium and cadmium compounds in humans upon occupational exposure. The Joint Food and Agriculture Organization / World Health Organization Expert Committee on Food Additives (JECFA) has evaluated the safety of cadmium, and considered that cadmium did not appear to have significant carcinogenic potential via the oral route. JECFA has established a provisional tolerable weekly intake (PTWI) of 7μg per kg body weight for cadmium.