The Process Contaminant 3-MCPD in Condiments

Condiments such as soy sauce are often used to add flavours to food. While some of them were made by natural fermentation that have a long history of use, others were manufactured using acid-hydrolysed vegetable proteins (acid-HVPs). In the past, public concern was raised when certain acid-HVPs containing soy sauce samples were found to contain high levels of a process contaminant called 3-monochloropropane-1,2-diol (3-MCPD).

3-MCPD in Acid-HVPs and Condiments

The traditional production of soy sauce involves natural fermentation of soy bean and this process could take up from three months to a year to produce the desirable flavour. Of note, soy sauce made by natural fermentation does not contain or only contain trace amount of 3-MCPD. One of the ways to enhance the flavour of soy sauce within a shorter production time is the addition of acid-HVPs. Acid-HVPs are produced via the hydrolysis of vegetable proteins in the presence of an acid. Other than soy sauce, acid-HVPs may also be used as flavour enhancers and ingredients in other condiments, such as oyster sauce, chicken powder and gravy granules. 3-MCPD may be formed during the production of acid-HVPs and may be present in condiments with acid-HVPs added. 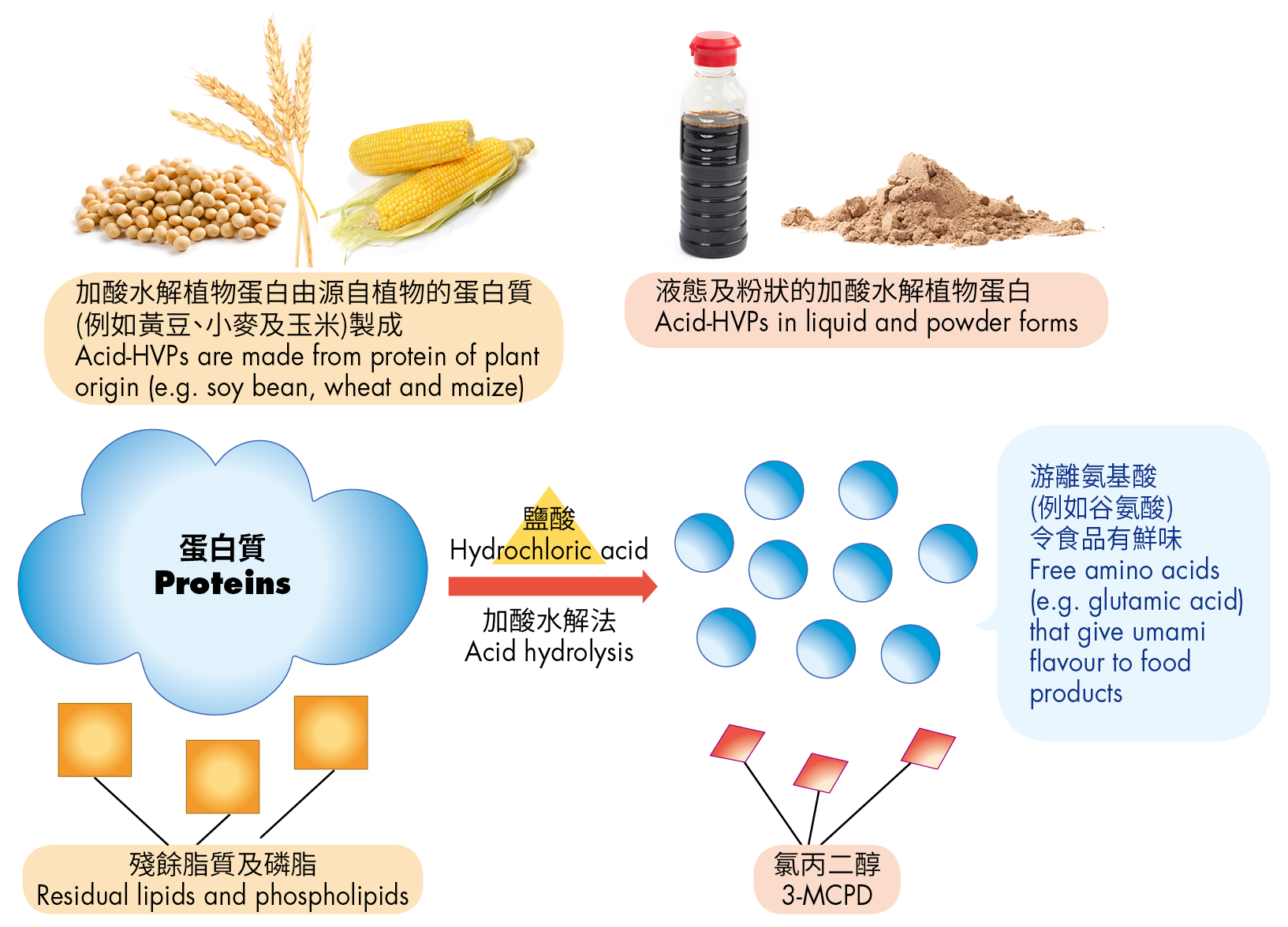 The production of acid-HVPs involve acid hydrolysis as a major step. Proteins derived from vegetable sources are hydrolysed by hydrochloric acid to form free amino acids, which give umami flavour to food products. Residual lipids and phospholipids that are not removed from the source may react with hydrochloric acid under certain conditions to form 3-MCPD.

In previous studies conducted jointly by the Food and Environmental Hygiene Department and the Consumer Council, the level of 3-MCPD in all condiment samples were below the relevant maximum level established by the Codex Alimentarius Commission (Codex). Surveillance data of soy sauce and oyster sauce in recent years also suggested that the level of 3-MCPD in samples collected from the local market did not exceed the Codex standard.

Ways to Reduce the Formation of 3-MCPD in Condiments

Since 3-MCPD is a contaminant that arises from food manufacturing process, the trade is advised to observe good manufacturing practice and reduce the level of 3-MCPD in condiments as low as reasonably achievable. To assist the trade in reduction of 3-MCPD in condiments, the Codex has published the "Code of Practice for the Reduction of 3-Monochloropropane-1,2-diol (3-MCPD) during the Production of Acid-HVPs and Products that Contain Acid-HVPs." Approaches to reduce the level of 3-MCPD in acid-HVPs include (but not limited to) :