Coffee: The Morning Routine for Many 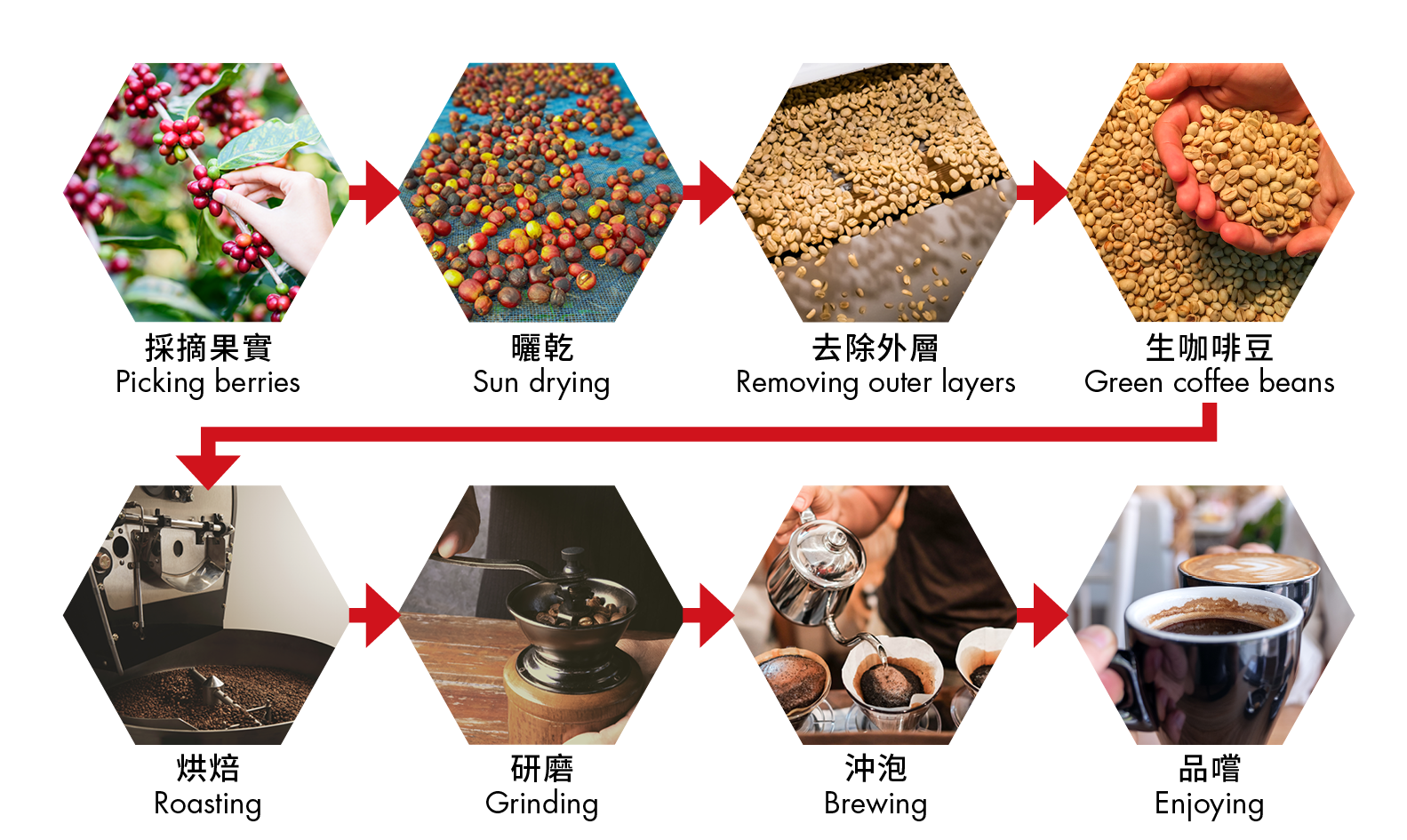 Coffee: from farm to cup

Recently, local news media reported that a company claimed that more than half of 37 freshly prepared coffee drink samples they bought from chain stores locally contained "toxicants" and/or estrogen-like substances.  In this article, we will share the knowledge on coffee, including contaminants that it might have and its potential health effects.

Coffee is a drink prepared from the seeds of coffee plants which are native to tropical areas of Africa.  It is now widely cultivated in many areas in the world.  The berries of coffee plants are harvested when ripened, followed by sun drying and peeling.  These processed seeds, known as coffee beans, are then roasted, ground and brewed with water to produce an infusion.  It may also be further processed into instant coffee powder, bottled beverages or other coffee products.

Is Coffee Drinking Beneficial or Harmful to Health?

In recent years, epidemiological studies revealed that consumption of coffee is associated with decreased risk of certain chronic diseases, for example, cardiovascular diseases and type 2 diabetes.  There is also consistent evidence that coffee can probably protects against endometrial cancer and liver cancer.  These health-promoting effects are generally presumed to be due to bioactive compounds that coffee contains, particularly plant polyphenols.

Notwithstanding that there is evidence of health benefit, over-consumption of coffee may pose some health risks, especially related to its caffeine content.  On the one hand, drinking too much coffee  can lead to shaky hands, increased heart beat rate, difficulty in sleeping, headache, dizziness and dehydration.  On the other hand, habitual drinkers who stop drinking abruptly would suffer from withdrawal symptoms like headache, fatigue, irritability and difficulty in concentrating.  The Centre for Food Safety (CFS) had conducted a joint study with the Consumer Council on the caffeine content in coffee and milk tea prepared in local food premises in 2013, and advised that certain individuals like pregnant and lactating women should limit their caffeine intake to no more than 200 – 300 mg/day, while children should consume less than 2.5 – 5 mg/kg body weight/day.  For reference, a cup of coffee may contain some 90 to 200 mg caffeine per serving depending on the preparation method.

What Factors Affect the Concentration of Caffeine in Coffee Infusions?

Many factors can affect the level of caffeine in coffee.  For example, the Robusta variety of coffee contains more caffeine than the Arabica variety of coffee.  On per volume basis, espresso has the highest level of caffeine, followed by cold brew, whereas French press (plunger) and pour over (filter) have the least amount.  Higher water temperature, longer brew time and finer grind size of the coffee powder can also increase the efficiency of caffeine extraction.  It is worth noting that decaffeination may remove about 97% or more, but not all, of the caffeine content in coffee beans.

In terms of cancer, the International Agency for Research on Cancer (IARC) classified coffee drinking as 'unclassifiable as to its carcinogenicity to humans' in 2016.  The IARC stressed that the classification means the existing scientific data do not establish a conclusion whether it causes cancer.

Coffee roasting can cause the formation of acrylamide, a process contaminant that is probably carcinogenic to humans as classified by the IARC.  However, CFS data indicate that acrylamide level in coffee is only 11 μg/kg on average, and contribution of coffee to acrylamide intake to the diet of local adults is insignificant.

Coffee beans can also contain ochratoxin A, a fungal toxin, due to moulds formed from inadequate drying.  However, coffee roasting is known to remove ochratoxin A in varying amounts.  According to the local study conducted by the CFS, the average level of ochratoxin A in coffee is only 0.03 μg/kg, and the exposure level from all foods is very low, accounting for 9.2% of the health-based guidance value even for high consumers.