African Swine Fever is Not a Threat to Food Safety

Mainland China reported its first outbreak of African Swine Fever (ASF) in Shenyang, Liaoning Province on 3 August 2018. Since then, multiple farms have been affected and more than 320,000 pigs have been culled in order to control the disease.

What is African Swine Fever?

ASF is a serious, highly contagious, viral disease of pigs. This disease was described in Kenya in the 1920s and according to the World Organisation for Animal Health, outbreaks have also been reported in other parts of Africa and parts of Europe, South America and the Caribbean historically. More recently (since 2007) the disease has been reported in multiple countries across Africa, Asia and Europe. This disease only affects pigs and the death rate can reach up to 100%. There is currently no vaccine or treatment available. As a result, ASF is a severe threat to pig production systems.

The disease can be transmitted by direct or indirect contact between pigs. Once infected, it can take around 4 to 19 days before the pig starts to show sickness and the shedding of virus can begin up to two days prior to the presence of the clinical signs. Virus will shed through all secretions e.g. saliva, tears, nasal discharge, etc. and excretions e.g. urine, faeces, etc. and able to survive in excretions, carcasses, fresh meat and certain meat products for long periods of time. Although the virus can survive a long time in contaminated meat, the virus can be heat inactivated by 70°C for 30 minutes. 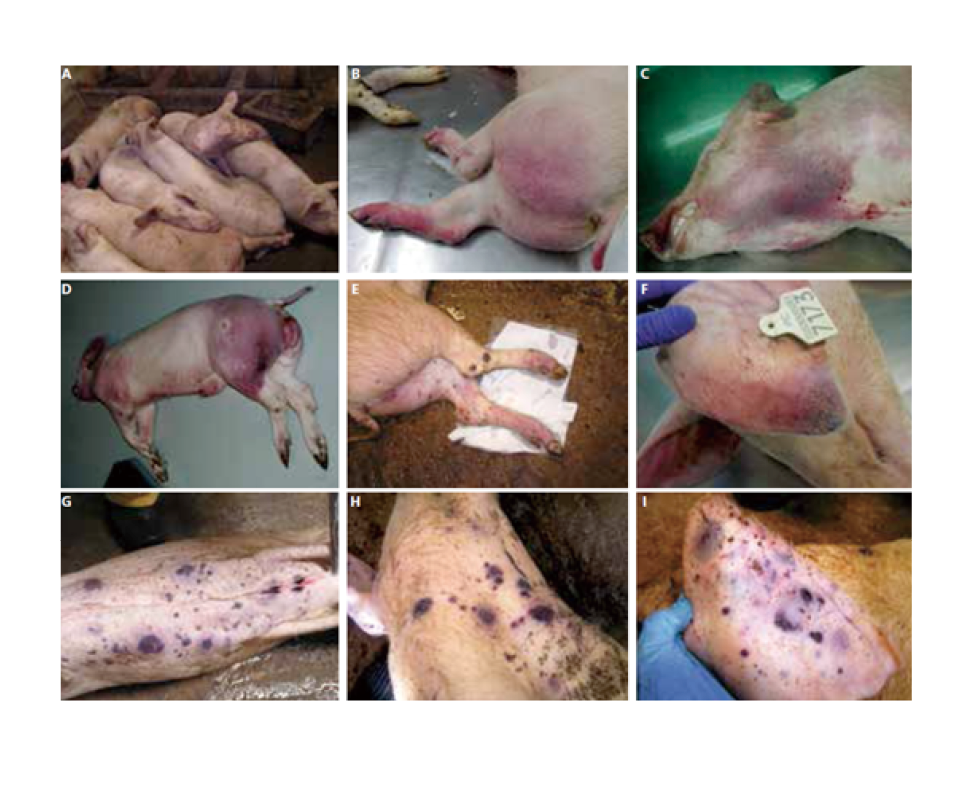 Clinical signs of acute ASF
A. Pigs are visibly weak with fever and huddle to stay warm.
B-E. Bloody diarrhoea and distinct hyperaemic (red) areas on skin of neck, chest and extremities,
F. Cyanosis (bluing) at the tips of ears.
G-I. Necrotic lesions on skin of the abdomen, neck and ears.
Source: Beltrán et al., 2017

ASF is not a threat to human health as it is a non-zoonotic disease, that is, a disease of animals that does not infect humans. Viruses have surface proteins on the outside which must bind to a host cell in order to enter and replicate. Different species of animals have different proteins on the outside of their cells and certain viruses can only bind to the surface of cells in particular species of animals. The ASF virus can only attach to and enter specific cells in pigs but not cells in the human body. Since the discovery of ASF, there has so far been no evidence of mutation causing cross-species transmission to humans in the past century.

Measures Taken Against ASF at the Import Control Point

As part of the government’s efforts to deal with the outbreak of ASF and prevent the disease from spreading to local pig farms, the Centre for Food Safety has stepped up its monitoring plan to all live pigs imported from Mainland China. For each consignment of the imported pigs, there will be a documentary check to ascertain that the consignment is accompanied with a valid health certificate which attests that the pigs do not show clinical signs of ASF, and that the animals are not originated from ASF affected farms/regions. In addition, physical inspection will be carried out at the site to ensure all pigs are physically healthy and do not show clinical signs suggestive of ASF. 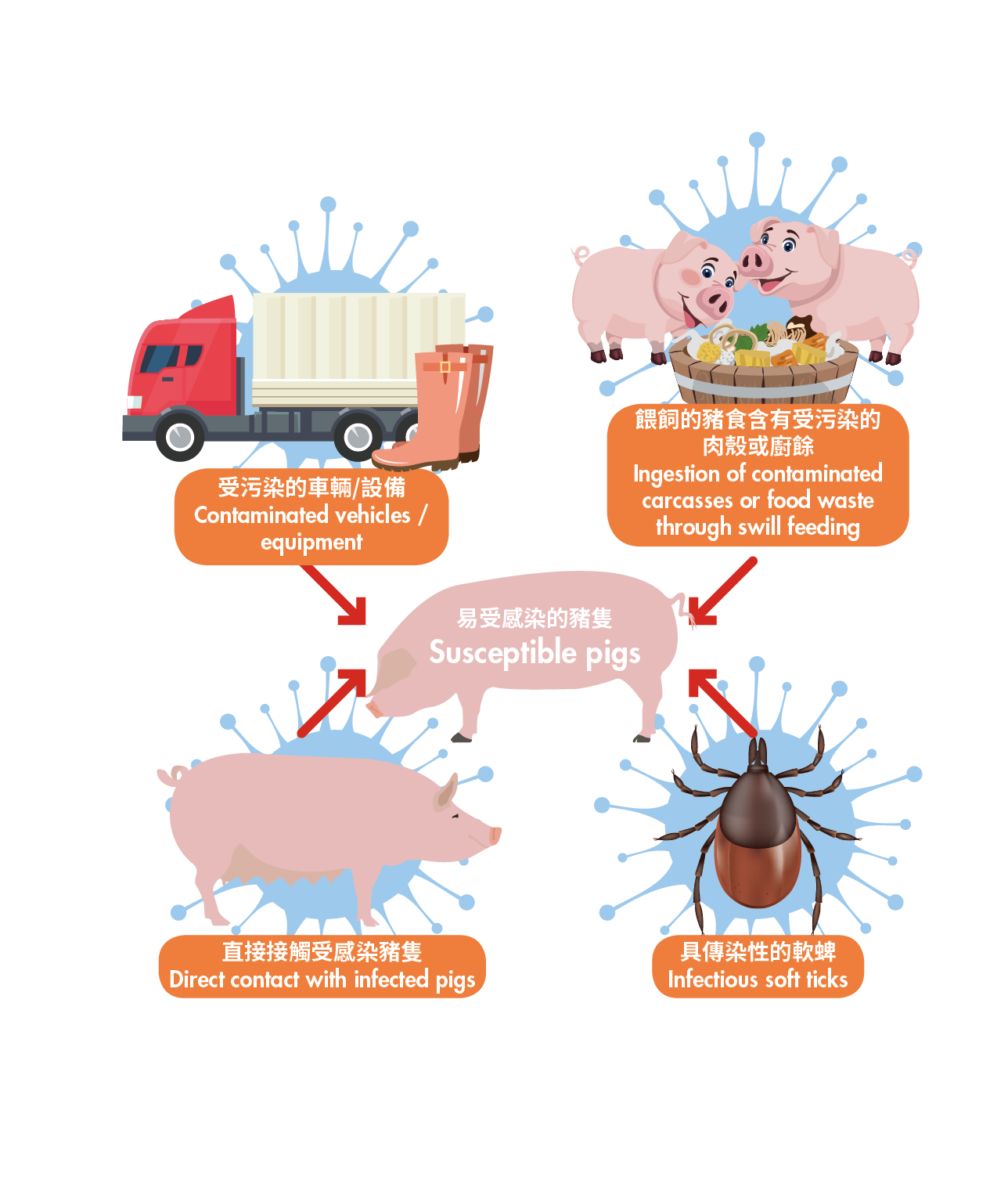 Measures Taken Against ASF in Slaughterhouses

The best strategy against ASF is preventing the entry of the virus through improved biosecurity. Since the start of ASF outbreaks in Mainland China, Hong Kong SAR government has enforced strict biosecurity measures at farms and slaughterhouses to reduce the likelihood of ASF incursion into local farms. The following measures have been put in place to reduce the chance of ASF virus entering and leaving the slaughterhouses.

Upon arrival, pigs are subjected to ante-mortem examinations, including monitoring of animals in lairages (animal holding areas) with increased vigilance for signs of ASF and abnormal mortalities. After slaughter, carcasses must also pass post-mortem inspections by health inspectors to ensure they are fit for human consumption before going to retail. Cleansing and disinfection within the slaughterhouses have been strengthened and to prevent spread of disease to local farms, cleansing and disinfection of the livestock conveying trucks have been reinforced.

In addition, if pigs are suspected to have ASF, samples will be taken and sent to the Veterinary Laboratory of Agriculture, Fisheries and Conservation Department for testing.