In mid-July 2007, two shipments of pork from the United States were rejected by the Taiwanese health authority, as the pork was found to contain a non-permitted leanness-enhancing feed additive, ractopamine, which is a beta-adrenergic agonist (β-agonist) that can promote growth and muscle leanness in certain food animal species.

Increasing consumer demands for high quality lean meat in recent years and the aim for maximising productivity have driven the pig farming industry to constantly improve their existing farming practices, which may include the addition of growth-promoting agents such as hormones, antibiotics and β-agonists in the animal feeds. 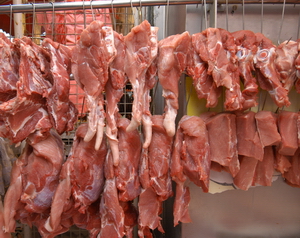 Why are Veterinary Drugs Useful in Food Animal Production?

The development of human pharmaceutical medicines has been accompanied by a similar expansion in the development and the range of pharmaceutical products available to the veterinary profession for the treatment and control of animal diseases, such as bacterial infections, parasitic and fungal diseases. Their use is essential for the health and welfare of food-producing animals. Intensive animal farming has led to a substantial increase in the use of veterinary drugs and growth promoters over the past decades.

As with human medicines, veterinary drugs have to undergo extensive evaluations for efficacy and safety to ensure that they are both effective and safe to use. A range of veterinary drugs is allowed to be used under prescribed conditions in rearing food animals.

What are β- agonists?

β-agonists are a group of synthetic compounds that share some similarity in their chemical structures. According to the slight differences in their structures, they are classified into five different sub-groups. Clenbuterol, ractopamine and salbutamol are some of the examples of β-agonists.

When β-agonists are used over a prolonged period, up to three to four months, they can promote growth and increase muscle leanness by inducing a redistribution of fat to muscle tissue in certain food animal species such as pigs and cattle.

What are the Health Concerns Regarding β- agonist Residues in Food?

Inappropriate usage of β-agonists may leave residues in edible tissues that are of health concern for consumers. For instance, acute poisoning can occur in humans as a result of consumption of meat or offal which contains high levels of clenbuterol. As clenbuterol is heat stable in edible tissues, ordinary home cooking methods such as boiling, roasting, frying and microwaving cannot eliminate its residues. The symptoms of clenbuterol poisoning are rapid heart beats, dizziness, headache, nervousness, tremor and blood pressure changes. People with heart disease and blood pressure disorder are more likely to be affected.

What are the Differences between Ractopamine and Clenbuterol?

As compared with clenbuterol, ractopamine has a much shorter half-life in blood. In addition, it is more readily inactivated in the liver, eliminated faster and has lower potential for bioaccumulation in general. When administered orally to a number of animal species, ractopamine is more rapidly absorbed and rapidly excreted with very low level of tissue residues. The food safety concern for ractopamine is rather low.

Are Alternative Methods Available to Improve Quality of Pork?

Genetic selection for improved meat quality can be achieved by selective breeding. Although the process is relatively slow, the improvements are permanent, cumulative and sustainable, and therefore cost-effective.

Feeding regime and diet with balanced level of nutrients have been shown to have significant effects on the meat quality. A good feeding program is essential to provide the right nutrition to pigs in different stages of development. This will also ensure the genetic merits of the pigs are fully expressed.

Generally speaking, farming practices that minimise stress in pigs typically maximise pork quality. These practices include avoid overcrowding of animals, avoid mixing of animals from different groups after weaning, during transportation and in lairage and slaughtering.

How are β- agonist Residues in Food Monitored in Hong Kong ?

The Public Health (Animals and Birds) (Chemical Residues) Regulation, Cap 139N governs the feeding of veterinary drugs including clenbuterol, salbutamol and other agricultural chemicals to livestock, whilst the Harmful Substances in Food Regulations, Cap 132AF forbid the sale of tainted meat or offal thereof. The relevant legislations have become effective since 31 December 2001.

In the local slaughterhouses, mandatory pre-slaughtering testing of all pig consignments is in place. Those consignments of pigs found to have positive results are humanely destroyed. An average of over 60 000 urine samples are tested every year. The relevant statistics are shown in Figure 1. There is also a comprehensive food surveillance programme for pork and pig's offal. Samples of pork and pig's offal are taken regularly from fresh provision shops and market stalls for testing of specified chemical residues. 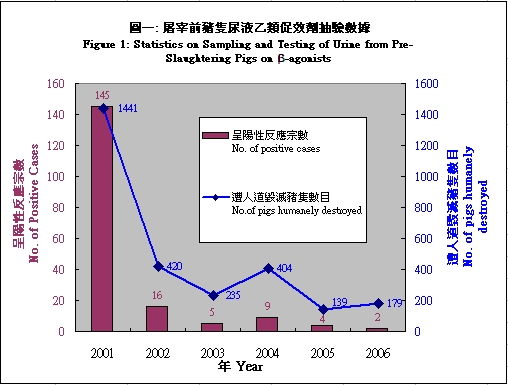