Review of Food Incidents in 2017

Timely management of food incidents is the key to mitigating and controlling the potential risks associated with food hazards. The Centre for Food Safety (CFS) has put in place the Food Incidents Surveillance System (FISS) to detect overseas and local food incidents. FISS is important for the CFS to make prompt food safety management decision in response to those incidents that would have local impact.

In 2017, the CFS assessed about 1,300 food incidents and 450 food recalls related to undeclared allergens identified through FISS, similar to the figures in 2016. To prevent people from further exposure to concerned food hazards as well as to alert the public to take appropriate actions, the CFS issued 176 food incident posts, 41 press releases and 29 trade alerts. The hazards identified included microbiological (e.g. Salmonella, E. coli, etc.), chemical (e.g. use of unauthorised/excessive preservatives, undeclared allergens), physical (e.g. e.g. foreign bodies such as glass, metal and plastic pieces) and others. Among local alerts, about 50% were related to chemical hazards (see Figure). 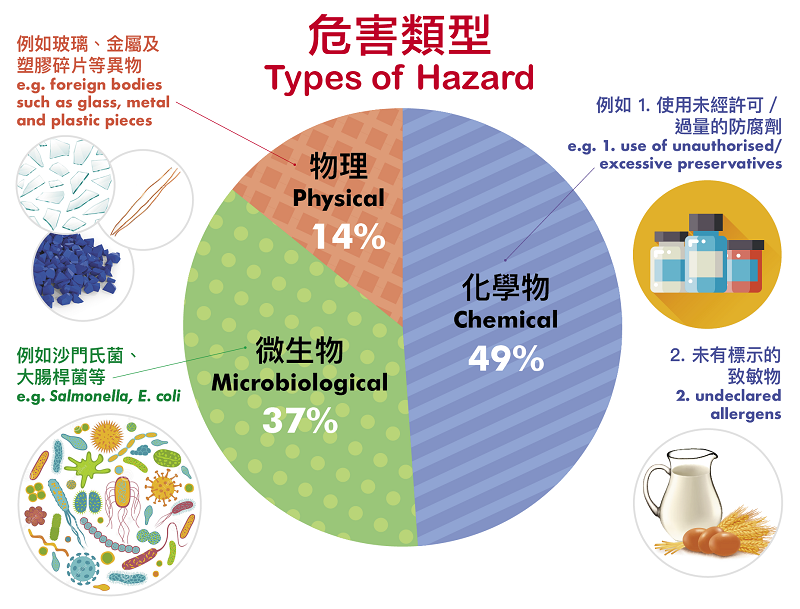 Types of hazard involved in local alerts due to food incident.

Brazil is a major source of frozen and chilled meat and poultry meat of Hong Kong. In March, there were suspected corruption or misconduct of the Brazilian food safety personnel and hence the product quality of some meat plants was affected. The CFS was highly concerned about the incident and fine-tuned its actions having regard to the situation. As a precautionary measure in the initial stage, the CFS had temporarily suspended the import of frozen and chilled meat and poultry from Brazil on 21 March and stepped up its surveillance.

Upon the updated information provided by the Brazilian authorities and its strict implementation of its food safety system at the export level as well as the satisfactory test results of its surveillance, the CFS narrowed the scope of import suspension to exports from 21 plants on 28 March. Later, the CFS identified several suspected falsified health certificates for imported frozen meat from Brazil. CFS’s investigation revealed that a total of 10 consignments of pet food have been exported from Brazil to Hong Kong as food for human consumption by one exporter from October 2016 to September 2017. All relevant importers had been promptly contacted and confirmed that all products had been shipped out of Hong Kong without local sale. In this connection, the CFS had immediately stepped up its verification checks of all the health certificates issued for frozen meat and poultry meat exported from Brazil to Hong Kong, and instructed the trade to suspend the import of products to Hong Kong from the exporter and two Brazilian production plants as listed in the health certificates concerned. As of December 2017, 691 relevant samples had been collected for testing and all results were satisfactory.

Review of the import control arrangement for Brazilian frozen/chilled meat and poultry with the Brazilian authorities is still on-going.

In early August, upon learning that certain eggs produced in the Netherlands were found to contain fipronil, a pesticide, at levels with potential adverse health effects, the CFS immediately took follow up actions, including checking import records, contacting major importers and conducting inspections at major retail outlets. As the incident evolved, eggs from some other places were also found to be tainted with fipronil.

The CFS then enhanced surveillance on eggs from imported countries of concern. Two Dutch egg samples collected at retail level were later found to contain fipronil at levels exceeding the maximum residue limit as stipulated in local legislation. The vendors concerned were instructed to stop sale, remove the products concerned from shelves and initiate recall. 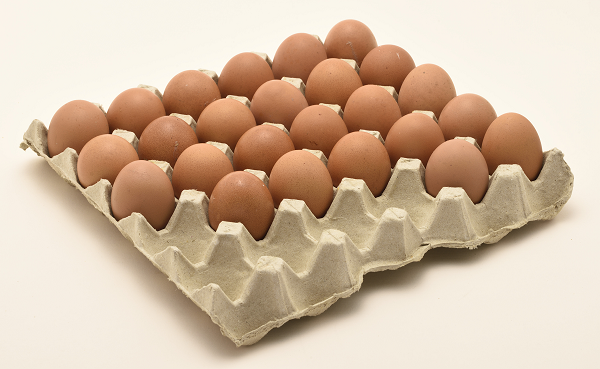 In addition, the CFS has stepped up the hold and test measure (i.e., requiring the importers not to sell the eggs/egg products concerned until satisfactory test results were available) for poultry eggs from the Netherlands and gradually extended to cover all EU countries. Under the hold and test arrangement, three egg samples and three egg product samples from two consignments imported from Belgium and collected at import level were found to contain fipronil at levels exceeding the local limit. All had not been released to the market and had been disposed properly later.

Since the incident, the CFS had collected another 230 samples of poultry eggs and egg products from EU countries for fipronil testing and all were satisfactory.

As EU had implemented monitoring plan and taken measures to ensure that only poultry eggs and egg products meeting the local legal requirements would be exported to Hong Kong, together with our negative surveillance findings, it was decided to narrow the hold and test arrangements to focus only five EU countries involved in the incident on 28 September 2017 and eventually the arrangement was ceased on 1 December 2017.

The above incidents demonstrated that the CFS adjusted its food safety management actions timely and appropriately upon any change of information received through FISS.