On 15 November 2017, the Centre for Food Safety (CFS) and the Consumer Council announced the results of a joint study which examined the nutrient content of Hong Kong style savoury dishes, some of which are considered signature of our local cuisine. Shortly afterwards, the Department of Health also released the report of Population Health Survey 2014/15 which revealed that the daily salt intake among local persons aged 15 to 84 was 8.8 g (about 3520 mg of sodium), a level which is well above the World Health Organization (WHO) recommended daily limit. Excessive intake of sodium may increase the risk of developing high blood pressure, and untreated high blood pressure can lead to heart attack, stroke and kidney failure, etc. This article highlights some key results on sodium in the dishes and urges the trade to take prompt actions to address this important public health issue.

Ten samples for each of the 10 types of Hong Kong style savoury dishes had been collected from Chinese restaurants, local style cafes and fast-food chains in the local market, and tested for the contents of sodium and other nutrients.

The study also simulated different scenarios of eating out in local food premises. Remarkably, it was revealed that even with different combinations of dishes, the sodium intake for the whole meal per person would still far exceed one-third of WHO’s recommendation on daily intake upper limit for sodium (i.e. 2000 mg per day for adults, or less than 5 g of salt per day). Again, this signifies that the trade needs to reduce sodium content of Hong Kong style savoury dishes through recipe modification, so that members of the public can reduce their sodium intake gradually when eating out.

In view of the study results, some restaurants involved in this study responded positively that they would consider taking measures such as strengthening communication with chefs and relevant staff training, and would seek actively to modify recipes for continue improvement of sodium content in food. 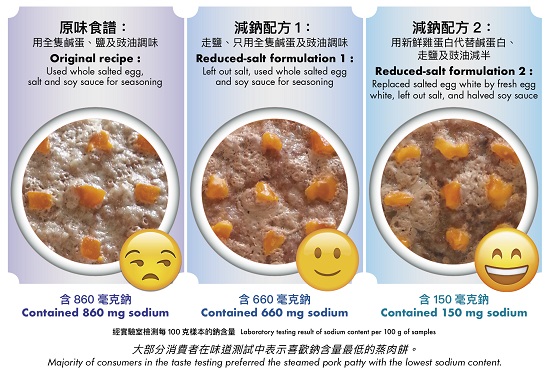 The dish “steamed minced pork patty with salted egg” is used here for illustration purpose. The major sources of sodium in this dish come from: (i) salted egg, especially egg white; (ii) salt and condiments for marinating; and (iii) extra soy sauce may be added before serving. Knowing where the sodium comes from, professional chefs and consumers at home can exercise creativity to modify their recipes with a view to cutting down sodium content of the dish whilst maintaining a tasty final product. Indeed, the CFS has conducted a taste testing on steamed pork patties with different sodium contents earlier on (see illustration), and it was encouraging to find that the majority of participating consumers had shown preference for the patty with the lowest sodium content.