Red rice is a type of whole grain rice which has red coloured bran covering the rice kernel. According to the Food and Agriculture Organization of the United Nations, red rice is rich in fibre, B vitamins as well as minerals (e.g. iron, zinc) and is generally more nutritious than white rice. The World Health Organization and many other health authorities recommend including whole grains (e.g. red rice, oatmeal) as part of a balanced diet. Red rice is mixed with white rice to increase dietary fibre intake and is gaining popularity.

Red fermented rice is produced by fermenting rice with the fungus of the genus Monascus , most commonly Monascus purpures (see Fig). Different from red rice, red fermented rice (also known as red yeast rice, monascus, hong qu and angkak) is not consumed as a staple. It has been used as food colourant, flavour enhancer, for meat preservation and wine brewing in Asia for centuries. Traditionally, red fermented rice is used in furu, rice wine, and some Chinese cuisines. 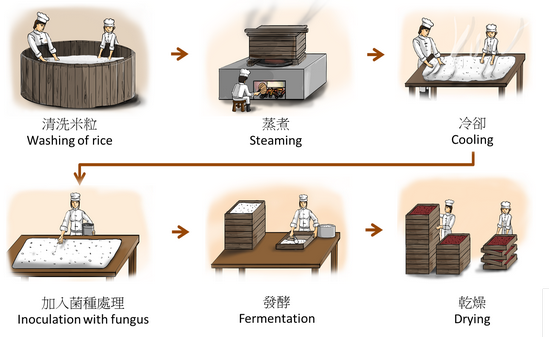 Red fermented rice is made by fermenting steamed rice with fungi of the Monascus species.

Depending on the Monascus strains used and the fermentation conditions, various products of Monascus spp. may be formed. These include various pigments, which give the distinct colour to red fermented rice, and some pharmacologically active substances (e.g. monacolin K).

Monacolin K produced during Monascus fermentation is chemically identical to the active ingredient in the cholesterol-lowering drug lovastatin. Consumption of products containing monacolin K may affect blood cholesterol levels and causes the same types of side effects (e.g. liver toxicity and muscle problems) and drug interaction as lovastatin. While consumers have no way of knowing how much monacolin K is present in red fermented rice and its products, tests performed by the US Food and Drug Administration (FDA) indicate that red fermented rice sold as a food product contains no or only traces of monacolin K.

In the US, lovastatin is an active ingredient in FDA-approved drugs used to treat patients with high blood cholesterol. In 1998, the US FDA determined that a red fermented rice product, intended to be sold as dietary supplement, contained a substantial amount of monacolin K was an unapproved new drug, not a dietary supplement. On several occasions since then, the US FDA has taken action against companies selling red fermented rice products that contain more than trace amounts of monacolin K.