In September 2016, the routine Food Surveillance Programme of the Centre for Food Safety (CFS) detected Salmonella in an imported sample of prepackaged vegetable salad collected at local supermarket. This article discusses the risk of Salmonella and risk factors for contamination of vegetables with pathogens.

Salmonella is a group of bacteria that can be found in the intestinal tracts of animals, including domestic pets, livestock and wildlife. Some Salmonella species can cause foodborne illness in humans. Individuals who are infected with Salmonella may suffer from vomiting, diarrhoea, abdominal pain, and fever. Though rare, serious complications like dehydration, septicaemia and death may occur when appropriate treatment is delayed. Human infection typically occurs 12 to 36 hours after its introduction to human, although incubation period of six to 72 hours is reported.

Similar to overseas countries (e.g. Australia, Canada, the United Kingdom, and the United States), Salmonella is an important foodborne pathogen in Hong Kong. According to surveillance data of the Centre for Health Protection of the Department of Health spanning between 2010 and mid-2016, Salmonella was the most common causative agent of confirmed food poisoning cases in Hong Kong, accountable for more than one third of these cases. Salmonellosis is usually associated with raw eggs and inadequately cooked meat and poultry.

Risk Factors for Contamination of Vegetables

Food of vegetable origin, such as vegetables to be eaten raw and fruits (e.g. berries), is also of concern in terms of microbiological hazards (e.g. Salmonella, Escherichia coli (E. coli) and Listeria monocytogenes). The Joint FAO/WHO Expert Meeting on Microbiological Risk Assessment indicated, from a global perspective, that leafy green vegetables (e.g. salad leaves) presented the greatest concern, mainly because they are grown and exported in large volume and are found associated with multiple outbreaks with high numbers of illnesses. Moreover, many of them are grown and processed in grossly diverse and complex manners, ranging from in-field packing to pre-cut and bagged products. 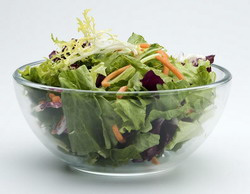 Pathogens such as Salmonella can be found in vegetable salad

Salmonella can be introduced and get amplified in vegetables as they move through the food chain. Primary production is probably the main concern area as vegetables are mostly grown and in contact with soil. Undesirable agricultural practices such as using improperly treated animal manure and irrigating with contaminated water may introduce foodborne pathogens like Salmonella and E. coli to the produce.

Besides, vegetables can also become contaminated during processing or by food handlers. Post-harvest activities, for example, holding temperature during storage and transport, may provide opportunities for contaminating pathogenic bacteria in vegetables to increase from an insignificant number to an infective dose.

CFS notified the vendor and the importer concerned of the unsatisfactory test result, and instructed them to stop selling the affected product immediately and initiate a recall. CFS also traced the distribution of the affected product, and alerted the trade and the relevant authorities of the exporting country about the incident. CFS would continue to follow up on the incident and take appropriate action.