Parasites in Fish for Raw Consumption

In September 2016, a local newspaper reported the presence of worm-like substances in a type of fish sushi sold at a local supermarket. In August, The New England Journal of Medicine reported a case in Japan that multiple larvae of the parasite Anisakis were found penetrating into the mucosa of the stomach of a woman who had history of consuming raw salmon two hours before the onset of chest and abdominal pain. Both reports aroused public attention. This article discusses the risk of parasites in fish and control measures for parasites in fish that is intended for raw consumption. 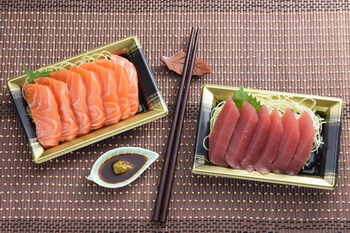 Consuming uncooked or undercooked seafood that harbouring parasites can present a human health hazard. It has been well known locally that raw freshwater fish such as grass carp and big head carp may carry Chinese liver fluke which can cause obstruction, inflammation and cancer of the biliary ducts in the livers of humans. However, the public appears to be less alert to the risk of parasites in marine fish including salmon and tuna and other kinds of seafood.

Among parasites, roundworms, tapeworms and flukes are of most concern in seafood. Some of these parasites cause mild-to-moderate gastrointestinal symptoms. Allergic reactions with rash and itching can also occur. In more severe and complicated cases, apart from causing diarrhoea and abdominal discomfort, some parasites such as lung flukes may migrate to other vital organs in humans (e.g. lungs), resulting in serious complications.

Anisakidae are one of the important fish-transmitted foodborne roundworms found in marine fish, crustaceans (e.g. shrimp) and cephalopods (e.g. squid). Humans may get parasitic infection (e.g. anisakiasis) if they consume raw or undercooked infected fish or other infected fishery products.

According to the Food and Agriculture Organization of the United Nations, parasites are more likely to be present in wild-caught fish and certain aquaculture fish if they are not exclusively fed on diets free of parasites. The Codex Alimentarius Commission also indicated that using raw fish as feed and contaminated water for aquaculture fish farming are risk factors for parasitic infections. As the environment of wild fish cannot be controlled, measures have to be taken at a later stage of the food chain, e.g. processing of fish that will be consumed raw or served undercooked. As for aquaculture fish, a good parasite control programme can reduce the risk of parasitic infections.

The European Food Safety Authority clearly indicates that traditional marinating and cold smoking methods are not sufficient to kill fishery parasites; and freezing and heat treatments, under well-defined condition, remain the most effective processes for killing parasitic larvae. The Codex Code of Practice for Fish and Fishery Products states that freezing at –20°C or below for seven days or at –35°C for about 20 hours for fish intended for raw consumption can kill parasites.