On 4 August 2016, imported pigs from the Mainland upon preliminary screening tests of urine samples were found to contain prohibited veterinary drug residues. On the following day, the Government Laboratory confirmed that the urine samples contained residues of salbutamol. During the course of events, some of the affected pork and pig offal slaughtered and had been discharged to the market. There was the possibility that some of the affected products were consumed by the public, but fortunately there were no subsequent reports of food poisoning.

Salbutamol is a β-agonist drug, which belongs to a group of synthetic compounds affecting β-adrenergic agonist receptors located in all body tissues, including the skeletal muscle. In humans, it is commonly used to treat patients with asthma. It functions by opening the airways and making breathing easier. Salbutamol, however, is not permitted for use in food animals in Hong Kong.

Presently there are seven prohibited drugs and 37 restricted drugs under monitory control in accordance to the Public Health (Animals and Birds) (Chemical Residues) Regulation (Cap. 139N) in Hong Kong. The seven prohibited drugs which are not allowed to be used in food animals include two β-agonists (salbutamol and clenbuterol), two antibiotics and three hormones. The remaining 37 restricted drugs are mainly antibiotics and the drug's concentration in tissue must not exceed the maximum residue limit. In addition, salbutamol is also controlled under the Harmful Substances in Food Regulations (Cap. 132AF).

The urine testing system for drug residue has been implemented since 1998 in slaughterhouses. Random urine samples are collected for every batch of pigs admitted to the slaughterhouses in Hong Kong. The affected animals are identified, humanely destroyed and the entire carcass disposed of. On average 50 000 food animal samples are collected yearly and surveillance results have detected the presence of clenbuterol and salbutamol in the past (see Figure). 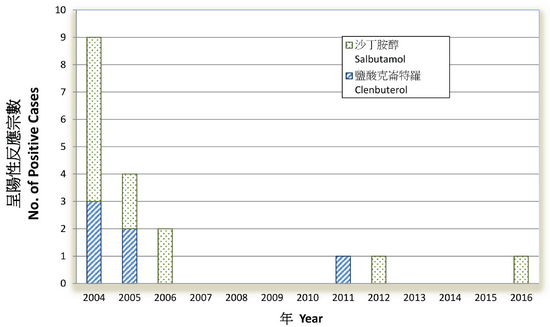 There are other β-agonists, including ractopamine. Ractopamine has been registered in Hong Kong since 2007 and it can be used in accordance to the label instructions, in food animals to produce meat.

As early as 1963, the positive effects of β-agonist as a feed additive in farm animals, including improved feed efficiency, increased growth rate, altered adipose accretion (improved carcass leanness), increased muscle mass in meat producing animals were well documented. The appeal of its benefits in agricultural use waned in the early nineties, following intoxication outbreaks attributed to consumption of livers from cattle treated with β-agonist (clenbuterol) and a subsequent ban on their use by the European Union.

Consumers have become increasingly concerned about food-borne risk (harmful chemical residues) and personal health and subsequently there is an increasing demand for high quality lean meat. There is an emphasis on meat that is not only safe, but also healthy. Meat quality is normally defined by the compositional quality (lean to fat ratio) and the palatability factors such as visual appearance, smell, firmness, juiciness, tenderness and flavour. The nutritional quality of meat is objective yet "eating" quality, as perceived by the consumer, is highly subjective. The perception of the healthiness of foods is influenced by various factors and improving the carcass leanness is a visual cue providing credence to the consumer of healthy, quality meat. This similarly provides the necessary impetus for the industry to pursue the continued use of β-agonists.

Inappropriate use of β-agonists (including clenbuterol and salbutamol) may leave residues in edible tissues that are of health concern for consumers. Clenbuterol studies show that it is heat stable in edible tissue and the drug has been shown to be stable in boiling water at 100°C. Ordinary home cooking methods such as boiling, roasting, frying and microwaving cannot eliminate its residues and there is little observed migration of the drug from the tissue into the surrounding liquid or meat juices. Overdose symptoms of clenbuterol and salbutamol may include nervousness, headache, tremor, dry mouth, chest pain or heavy feeling, rapid or uneven heart rate, pain spreading to the arm or shoulder, nausea, sweating, dizziness, seizure (convulsions), feeling light-headed or fainting.