Since the initial recall on 31 May 2016, several varieties of flour products have been recalled in the US due to possible contamination with Shiga toxin-producing Escherichia coli (STEC). Some people, who had eaten or handled raw dough, got sick. The US Centers for Disease Control and Prevention (USCDC) has reported that as of 25 July 2016, 46 people were infected with the outbreak strains of STEC O121 (45 people) or O26 (1 person). The USCDC and the US Food and Drug Administration (USFDA) are still investigating the outbreak. 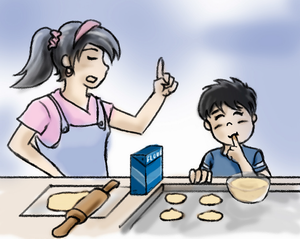 E. coli normally live in the intestines of people and animals. Most E. coli are harmless and actually are an important part of healthy human intestinal tract, but some strains of E. coli can cause diseases through the production of a toxin called Shiga toxin. These bacteria are called STEC but may also be called Verocytotoxin-producing E. coli (VTEC) or enterohaemorrhagic E. coli (EHEC). STEC is an important group of E. coli that can cause severe diarrhoea and has been implicated in many foodborne outbreaks worldwide.

The serotyping of STEC is based on their O antigen and H antigen. E. coli O157:H7 is the most common serotype while others E. coli serogroups, including O121 and O26, are called "non-O157 STECs". STEC can grow in temperatures ranging from 7 °C to 50 °C, with an optimum temperature of 37 °C. Some can grow in acidic foods, down to a pH of 4.4. It can be destroyed by thorough cooking until the core temperature of the food reaches 70 °C or above.

The incubation period for STEC infection is two to 10 days, usually three to four days. Symptoms of STEC infection include abdominal pain and watery diarrhoea that may in some cases progress to bloody diarrhoea. Fever and vomiting may also occur. A serious complication, haemolytic uraemic syndrome (HUS), occurs in two to 15% of STEC infection cases. HUS, a condition characterised by abnormal destruction of red blood cells, kidney damage and low platelet count, is more common in children under five years of age. According to the Centre for Health Protection of the Department of Health, 12 cases of STEC infection were recorded from 2012 to 2015.

Ruminants, especially cattle, are the natural reservoir for STEC. STEC may reside asymptomatically in the intestines of ruminants and may be shed intermittently in faeces. According to USFDA, flour is derived from grains that come from fields directly and is not treated to kill bacteria in general. If animals defecate or urinate in the field, their waste may contaminate the grains, which are subsequently harvested and milled into flour. People should therefore be aware of the risks associated with the consumption and handling of flour and raw dough.

STEC transmission occurs through consumption of contaminated food and water, or direct contact with STEC carrying animals. Person-to-person transmission of STEC is also possible. Raw or undercooked ground meat products, unpasteurised milk and contaminated raw vegetables and sprouts are of particular concern. Consumption of contaminated food may pose a high risk of illness as a low dose of STEC can cause illness in susceptible populations.