Group 1 Carcinogens in Food – Are You Eating Them?

In the previous issue, we introduced the classification system of the International Agency for Research on Cancer (IARC) on agents that cause cancers. In this issue, we will discuss some of the Group 1 carcinogens that are more commonly found in locally consumed foods.

Although Group 1 agents are deemed "carcinogenic to humans" by the IARC, some cannot be totally eliminated from the food supply due to their ubiquitous nature. We can, however, avoid consuming some of the food that contains carcinogens as their consumptions is a matter of lifestyle choices.

Aflatoxins (AFs) are a group of natural toxic contaminants produced by certain moulds. It is well understood that AFs are among the most potent carcinogen in nature that can cause liver cancer, especially for populations who have hepatitis B. The main source of human exposure is through peanuts and maize, although AFs are also found in dried fruits, nuts, spices, crude vegetables oil, rice, etc.

It has been reported that AFs cause up to 30% of all liver cancer cases in the world. In Hong Kong, up to 10% of some groups of Hong Kong population is hepatitis B carrier as quoted in the First Hong Kong Total Diet Study. Furthermore, the First Hong Kong Total Diet Study estimated that AFs contributed less than 1% (about 8 cases) of the incidence rate of liver cancer in 2010. There is no cause for undue alarm. The Joint FAO/WHO Expert Committee on Food Additives (JECFA) recommends that AFs intake be reduced to as low as practically possible. While complete elimination is not possible, the AFs level in crops can be minimised through the use of good agricultural practice without rejecting majority of the crops produced. The public should purchase food from reliable retailers, store grain products properly in cool and dry places, look out for the expiration date of food and discard mouldy or damaged food in order to reduce exposure to AFs. 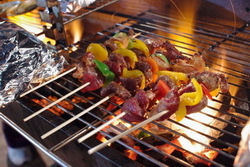 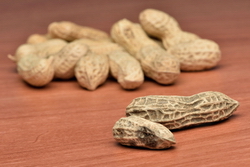 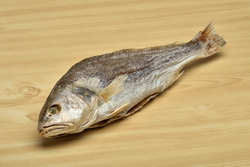 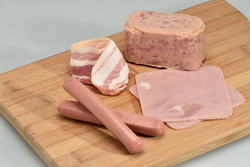 Processed meat refers to meat or offal that has been salted, fermented or transformed by other methods to improve preservation or enhance flavour. Examples of processed meat include sausages, corned beef and jerky. Epidemiological data suggest that processed meat is linked to colorectal cancer. Carcinogens may form during processing, while nitrates and nitrites used for curing meats may be transformed by bacteria in the human digestive tract to N-nitroso compounds, of which some are carcinogenic. Excessive consumption of processed meat should be avoided.

Benzo[a]pyrene (B[a]P) is a type of polycyclic aromatic hydrocarbons (PAHs) contaminant, which they share similar toxicological properties. PAHs are ubiquitous in the environment as they are formed during incomplete combustion or pyrolysis of organic materials, and therefore are present in the environment and food (including oil), where the level varies widely. Studies quoted by JECFA suggested that cereals and oils are major sources of dietary B[a]P. Locally, a 2004 Centre for Food Safety study found that the higher the cooking temperature or the closer the distance from the heat source when preparing barbecued meats or during BBQ, the more PAHs were generated.

Charcoal grilling gives rise to more PAHs in foods than gas or electric roasting. JECFA suggests that reduction of the overall PAHs exposure can also reduce the B[a]P exposure and vice versa. To minimise exposure, consumers should remove visible fat that can cause a flare-up before barbecuing, cut charred portions off the meat and avoid overindulge in barbecued meat.

Although it is impossible to completely eliminate all carcinogens from food, the risk from carcinogens in food can be reduced. The public should maintain a balanced diet and a healthy lifestyle to minimise the risk for cancer.

In the next issue, we shall discuss the relationship between alcohol and cancer.