In September 2015, the Centre for Food Safety (CFS) was notified of a food poisoning case involving two persons from the same household. They developed tongue numbness and a burning sensation in their mouths immediately after eating cooked potatoes prepared at home on the evening of 17 September 2015. Both sought medical treatment but did not require hospitalisation. They were in stable condition and their symptoms gradually resolved. Solanine was detected in the raw potato sample provided by the household and in a urine sample of one of the victims. The findings were compatible with solanine poisoning. Potatoes are known to contain glycoalkaloids which may induce gastrointestinal and systemic effects if consumed in high amounts. Local consumers are seldomly exposed to levels of glycoalkaloids that cause serious health effects. However, there have been in the past occasional reports of short-term adverse symptoms, usually from eating potatoes that contain elevated amount of glycoalkaloids.

Glycoalkaloids occur in all parts of a potato plant. The highest glycoalkaloid levels are found in flowers and sprouts while the lowest is in potato tubers. According to literature, the total glycoalkaloid content of commercial cultivars of tubers may vary between 10 and 150 mg/kg fresh weight (Figure 1). 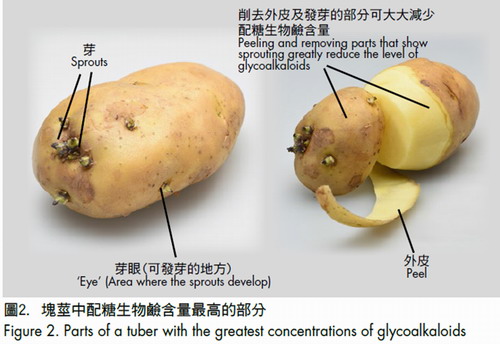 Increase of Glycoalkaloids During Storage

High levels of glycoalkaloid are toxic to humans. Acute symptoms, which generally occur 30 minutes to 12 hours after ingestion, include nausea, vomiting, stomach and abdominal cramps, and diarrhoea. More severe cases of glycoalkaloid poisoning may be accompanied by a variety of neurological effects (i.e. drowsiness, restlessness, shaking, confusion, weakness, and disturbed vision). However, it is unlikely that humans would eat potatoes containing high, fatal glycoalkaloid doses because glycoalkaloid concentrations above 200 mg/kg are associated with a bitter taste and a burning sensation in the throat and mouth (Figure 3). 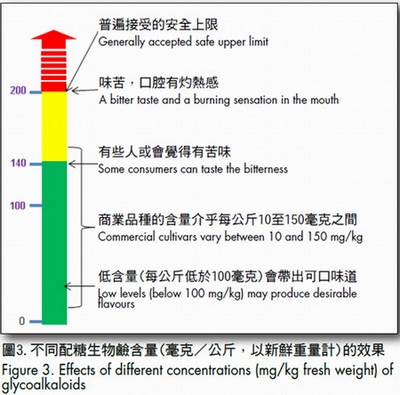 Codex has not established any food safety standard for glycoalkaloid levels in food; however, the generally accepted safe upper limit is considered to be 200 mg glycoalkaloids per kg of fresh potato. There is no specific regulation on glycoalkaloids in food stipulated in the laws of Hong Kong. Nevertheless, all foods for sale in Hong Kong must be fit for human consumption.

Upon the notification of the food poisoning case, the retailer was instructed to withdraw the potatoes concerned off the shelves.

While levels of glycoalkaloids in commercial potato varieties are unlikely to cause adverse health effects, improper storage (e.g. exposure to light) or damage to the tubers can lead to rapid production of glycoalkaloids. The increased glycoalkaloid content cannot be significantly reduced by cooking (i.e. baking, boiling, frying, and microwaving) because glycoalkaloids are heat stable and only begin to break down between 230oC and 280oC. Hence, the public is advised to store potatoes properly (i.e. in a cool, dry, dark place). To reduce the amount of glycoalkaloids in potatoes, the public is also advised to peel the skin and to remove the parts of the tuber that show damage, rotting, green colouring and sprouting before cooking. In more severe cases, discard the entire potato.