The Centre for Food Safety (CFS) recently found Paralytic Shellfish Poisoning (PSP) toxins in the range of 1 120 to 2 560 micrograms/100 grams in some samples of scallops (Sin Pui) of the species Patinopecten yessoensis. The CFS considered the health risk associated with these levels of PSP toxins high, and advised members of the public to stop consuming scallops (Sin Pui) for the time being.

PSP toxins are a group of natural toxins which can be found in bi-valve shellfish such as scallops, oysters, mussels and clams. The toxins are produced by certain species of micro-algae and can be concentrated within the shellfish, especially during algal blooms. The symptoms of PSP are predominantly neurological and the onset is rapid. PSP can be life-threatening.

The concentration of PSP toxins is generally higher in the viscera of contaminated shellfish. The toxins are heat-stable and cannot be destroyed through normal cooking, although a certain proportion may dissolve into the cooking liquid. Members of the public, when consuming any shellfish, are advised to remove the viscera, gonads and roe before cooking, eat a smaller amount and discard the cooking liquid so as to reduce the risk of shellfish poisoning. 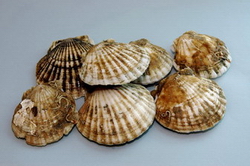