Last month, the Consumer Council reported that some 20 samples of dried squid snacks under testing contained arsenic. The level of arsenic was particularly high in one shredded squid sample. Excessive intake, like constantly consuming three or more packs of the dried squid concerned every week for a prolonged period of time, may pose possible health risk. The findings aroused much public concern on the risk of arsenic in food. High levels of arsenic may also be found in other food products. Not long ago, there were nation-wide recalls of some bottled mineral water in the United States and Canada due to the presence of high levels of arsenic. This article provides you with more information on food safety in relation to arsenic. 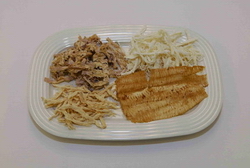 Arsenic is a metalloid present naturally in the earth's crust and is found in trace amounts in rock, soil, water and air. Primary route of human exposure to arsenic is mainly through ingestion of foods, especially aquatic foods containing relatively high levels of arsenic. Other routes of exposure such as through inhalation of air and via dermal absorption only play a minor or negligible role.

How Does Arsenic Go Into Our Foods and Affect Our Health?

Arsenic is widely distributed in nature and most arsenic compounds can dissolve in water and result in entering our food chain. Therefore, low levels of arsenic may be found in a wide range of foods. Arsenic exists in both organic and inorganic forms in foods, with the latter being more toxic. Fish and seafood can accumulate considerable amounts of organic arsenic from their environment, while the arsenic content of plants is usually determined by the arsenic content of soil, water, air, fertilisers, etc. In general, arsenic in food exists largely in its organic form and high levels of inorganic arsenic are not commonly found.

Chronic toxicity due to arsenic may lead to skin lesions, nerve damage, skin cancer and diseases of the blood vessels. The International Agency for Research on Cancer under the World Health Organization has classified arsenic in drinking water as carcinogenic to humans.

What Kinds of Food Contribute Most to Our Arsenic Intake?

As a means to assess the intake of metallic contaminants including arsenic in Hong Kong people, the CFS has conducted a risk assessment study on "Dietary Exposure to Heavy Metals of Secondary School Students" in 2002. According to the study, seafood other than fish made the greatest contribution (51%) to dietary exposure to inorganic arsenic, which was followed by fish (26%), cereals and cereal products (10%), vegetables (6%), meat, poultry and their products (4%), and milk and dairy products (3%). These findings were consistent with data in dietary exposure studies conducted in overseas countries including Australia, the USA and the UK which reported seafood accounted for the majority of dietary exposure to arsenic.

Is There Any Safety Reference Value on How Much Arsenic Can be Safely Consumed?

The Joint FAO/WHO Expert Committee on Food Additives (JECFA) has evaluated arsenic and established a provisional tolerable weekly intake (PTWI) of 15 μg/kg bw/week to inorganic arsenic. PTWI is an estimated amount of a contaminant that can be ingested over a lifetime without appreciable risk. An intake above the PTWI does not automatically mean that health is at risk. Transient excursion above the PTWI would have no health consequences provided that the average intake does not continuously exceed the PTWI which emphasises on a lifetime exposure.

How is Arsenic in Food Monitored in Hong Kong?

The CFS has been monitoring metallic contaminants, including arsenic, in foods under its food surveillance programme. The level of arsenic allowed in food is governed by the Food Adulteration (Metallic Contamination) Regulations, Cap. 132V. As for foods that have undergone a process of drying such as dried seafood, contaminants would have been concentrated during the drying process, therefore "processing factors" need to be applied to see whether the levels of metallic contaminant(s) detected in the samples have exceeded the legal limits. The processing factor for each dried food item is derived based on the change in water content of the food item before and after drying. This approach has been recommended by the Codex Alimentarius Commission and is being adopted by countries including members of the European Union and Australia. Legal limits stipulated in law are often confused with the respective safety reference values. The law states the amounts of chemicals allowed in different foods for monitoring and maintaining the standard of the food. Consuming food products with chemicals exceeding the legal standards does not automatically imply that the consumer's health is at risk. The consumption of the food product concerned also needs to be taken into the account to see whether the safety reference value has been exceeded. Therefore, while indulgence of a food with modest level of arsenic may be a health concern, occasional intake of a food with a high level of such chemical may not be of any health significance.

How Likely is Our Exposure to Arsenic Exceeds the PTWI?

The trade should ensure the foods they sell or import are fit for human consumption and comply with legal standards. Consumers are advised to take a balanced diet so as to avoid excessive exposure to certain chemicals or contaminants from a small range of food items.