Review of Food Incidents in 2014

The Centre for Food Safety (CFS) has set up a comprehensive system to proactively monitor and manage food incidents reported by the mass media and other authorities locally and abroad.

The CFS conducts prompt risk assessments on all food incidents identified from various sources with a view to identifying the potential hazards and assessing risks to the general public. Appropriate actions will be taken for those incidents with local relevance and significant potential public health risks. Such actions include keeping close communication with relevant authorities, alerting the trade and the public, conducting sales checks, taking food samples from the market for analysis, issuing public announcements, initiating food recalls and/or making prohibition orders.

In 2014, the CFS identified about 1 000 food incidents, a figure similar to that in 2013. In addition, another 550 food recalls related to undeclared allergens were identified. In response to these incidents, the CFS had selected at least 40 incidents involving 160 food products and issued 50 press releases, 62 alerts to the trade and 44 alerts to the public. More than half of the selected incidents were identified either locally or from the Rapid Alert System for Food and Feed (RASFF) of the European Union. Types of hazards identified included microbiological (e.g. Salmonella, Listeria, E. coli, etc), chemical, physical (e.g. foreign body, use of substandard substance) and allergen, with microbiological hazard accounting for over 50% of the cases. 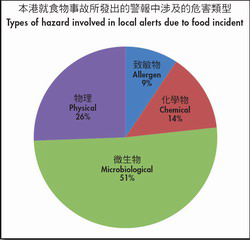 The CFS is committed to maintaining a comprehensive system to detect, manage and review food incidents in a timely manner. We strive for preventing unsafe food from entering the local market, so as to protect the public health in Hong Kong.