In the past two issues, we have introduced the nature of food colours as well as their proper and inappropriate uses. In this last article of the series, let us focus on the safety and health concerns about certain food colours in food.

Similar to food additives of other functional classes, food colours have to go through rigorous safety evaluation before they can be ascertained as safe for food use. Based on the toxicological data available for review, international food safety authorities may allocate for each food colour an Acceptable Daily Intake (ADI) which is an estimate of the amount of a substance in food or drinking-water that can be ingested daily over a lifetime without appreciable health risk.

Although some food colours have been ascertained as safe for food use, some consumers nowadays are still sceptical about them, wondering whether their use in food may associate with adverse health effects. Some of the health concerns are highlighted in the following paragraphs.

Potential to Cause Cancer

From time to time, media reports have raised the concern on the safety of certain food colours (e.g. amaranth and allura red AC) in relation to their potential to cause cancer. International food safety authorities would have evaluated the carcinogenicity of food colours before ascertaining that these food colours are safe for food use. Colourants which are known human carcinogens, such as benzidine-based dyes used primarily to colour textiles, leather and paper products, are not permitted for food use.

Indeed, some animal carcinogens are also not permitted for food use based on precautionary principle. Red 2G was evaluated by the Joint Food and Agriculture Organization / World Health Organization Expert Committee on Food Additives (JECFA), an international food safety authority in 1981 and was considered that its use in foods was not a safety concern at that time. Nevertheless, Red 2G was re-evaluated in 2007, and it was concluded that its metabolite, aniline, caused gene damages in experimental animals and carcinogenic risk for humans could not be excluded. Taking into consideration the available scientific evidence, international situation, and availability of alternative red food colours, the Centre for Food Safety removed Red 2G from the list of permitted colouring matter under the Colouring Matter in Food Regulations (Cap. 132H) in 2008 as a precautionary measure. 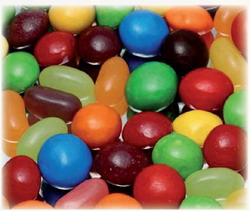 In the past decade, there has been extensive debate worldwide about the association between the use of some artificial colours in foods and behavioural changes, including hyperactivity, in susceptible children. Whilst some food authorities have held the view that simply taking these additives out of a child's diet may not eliminate these symptoms, others have decided to take precautionary measures and required that foods containing certain food colours to put up specified warning statement and / or to promote the voluntary phase out of these colours. In Hong Kong, the Expert Committee on Food Safety expressed its opinion in 2009 that a causal link between food colours and behavioural changes in children could not be established. To this end, the existing regulatory control through enforcing labelling requirements for food additives (including food colours) was considered appropriate yet it would be prudent to provide advice to the public for making informed food choices, especially for their children.

Potential to Cause Allergy

Advice to the Trade and the Public

Food manufacturers should only use those permitted food colours under Cap. 132H. In addition, they should use food colours according to good manufacturing practice. For concerned individuals and caregivers, they can make reference to the information in the ingredient list on food label and look for the names or identification numbers of certain food colours of concern for making discerned choices.