In March 2007, a food poisoning outbreak was reported in Zhanjiang in Guangdong province with one patient died after the consumption of a toxic goby, Yongeichthys criniger.

Y. criniger, a member of the Gobiidae family, is one of the few gobies that develop a powerful poison called tetrodotoxin, which also occurs in some puffers. This toxic goby looks similar to another member of the Gobiidae family, edible mudskippers for example Boleophthalmus pectinirostris which is a very common non-toxic food fish species in China. Therefore some people initially thought that the fish poisoning was caused by the consumption of mudskipper.

Tetrodotoxin-containing goby species are rarely found in Hong Kong. None of the food fish species of goby available in the local market have been reported to contain tetrodotoxin.

Tetrodotoxin is a potent marine neurotoxin, named after the order Tetraodontiformes with which it is commonly associated. Puffer fish (see illustrations) and porcupine fish are common examples of fish containing tetrodotoxin under this order. Tetrodotoxin has also been isolated from other animal species including goby, shellfish, California newt, parrotfish, frogs of the genus Atelopus, the blue-ringed octopus, starfish, angelfish, and xanthid crabs. 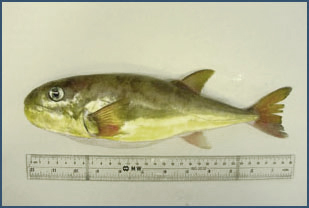 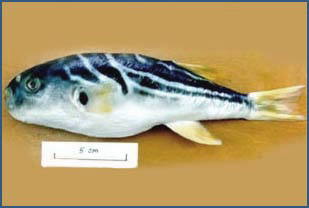 Tetrodotoxin is considered likely to be produced by marine bacteria that are often associated with marine animals. In puffer fish, the distribution of tetrodotoxin is mainly in the ovaries (eggs), liver and skin. The flesh is normally free of toxin. However, flesh of some toxic gobies such as Yongeichthys nebulosis also contains tetrodotoxin.

Tetrodotoxin is heat-stable and therefore likely to remain in fish tissue after food preparation steps (e.g. cooking and drying). Eating fish containing tetrodotoxin such as puffer fish and porcupine fish can therefore be hazardous.

In human, the lethal dose of tetrodotoxin is around 1 to 2 mg and the minimum dose necessary to cause symptoms has been estimated to be 0.2 mg. The onset of symptoms of tetrodotoxin intoxication usually occurs from 10 to 45 minutes after ingestion, but may be delayed by three hours or more. Paraesthesia appears in the face and extremities, which may be followed by dizziness or numbness. Nausea, vomiting, diarrhoea and epigastric pain may also be present. Later, respiratory symptoms such as rapid breathing may follow. Low blood pressure, convulsions and irregular heart rate may occur. In most instances, the patients retain consciousness until shortly before death, which usually takes place within the first six hours. All humans are susceptible to tetrodotoxin poisoning. There are currently no known antidotes or antitoxins to tetrodotoxin. The treatment of symptoms is therefore supportive.

Local cases of tetrodotoxin poisoning occur but are uncommon. In the past three years, there had been five cases of food poisoning, affecting twelve people, due to tetrodotoxin reported to the Department of Health. Of these, four cases (involving eleven people) were related to the consumption of puffer fish and the other one (affecting one person) was suspected to be related to the consumption of dried porcupine fish product (see illustration). The patient developed symptoms compatible with tetrodotoxin poisoning after consuming a soup made from dried porcupine fish.

In Hong Kong, all food available for sale on the market must be fit for human consumption and the trade should pay particular attention to the import and sale of fish and fish products to ensure they are safe for consumption. Consumers are advised to avoid purchasing, and dressing puffer fish, porcupine fish or unknown fish for consumption on their own.

Further information on the fish species may be available from the Hong Kong Marine Fish Database maintained by the Agriculture, Fisheries and Conservation Department.

Kind permission for the use of photographs by the Agriculture, Fisheries and Conservation Department and the Hong Kong Poison Information Centre is gratefully acknowledged.