On 13 November 2006 , the China Central Television reported that non-permitted colouring matter Sudan IV was used in duck feeds to enhance the colour of egg yolks. Follow-up investigations carried out by Mainland authorities and the Centre for Food Safety (CFS), respectively, revealed that Sudan dyes were present in some duck and hen egg samples. The incident has raised territory-wide concerns. The abuse of Sudan dyes in food is not something new; it has been reported in the United Kingdom (UK) relatively recently. In that incident, the UK Food Standards Agency issued its first food alert and the related product recall in July 2003 regarding Sudan I - contaminated chilli and chilli products; subsequent updates on food alert and product recall had followed. The problem reached a climax in February 2005, when the non-permitted dye was detected in a much wider range of food products (such as Worcester and other sauces, soups, ready meals) using the contaminated chilli and products thereof as part of the ingredients; a total of nearly 600 food products were recalled.

What are Sudan Dyes?

Sudan dyes are a group of industrial dye consisting of a number of red colours (e.g., Sudan I, II, III and IV etc). The International Agency for Research on Cancer evaluated the safety of Sudan I, II, III and IV in 1987 and considered that they were unclassifiable as to their carcinogenicity to humans. Although there is some evidence that Sudan dyes may cause cancer in experimental animals and may cause damage to the genes, there is currently inadequate evidence that they cause cancer in humans.

The use of Sudan dyes as colouring matters in food is not permitted in Hong Kong under the Colouring Matter in Food Regulations (Cap.132H), nor the food legislations in Mainland China and in other countries including members of the European Union (EU), Australia and Canada .

Based on the available information regarding the levels of Sudan dyes found in the affected food products, risk assessment suggested that usual consumption of the affected products is unlikely to pose a significant health effect and there should be no cause for undue concern. However, the health risk would be greater for people who frequently eat extremely large amounts of those affected products.

Why Sudan Dyes are Used in Food?

In the case of chilli and chilli products, the contamination was traced back to adulterated chilli powder originated from India . It was suspected that Sudan I was fraudulently used to enhance and maintain the colour of the product. The price of chilli powder is largely linked to the intensity of the colour and its maintenance. Indeed vegetable products lose their colour over time and thus may become less appealing to consumers after some time.

In the case of eggs, consumers tend to prefer golden-yellow egg yolks, particularly so for duck eggs. It was suspected that Sudan dyes were used in respective poultry feeds to enhance the colour of the yolks. The above purpose, however, can be achieved through a number of acceptable husbandry practices. The more common one is the manipulation of feed composition, for instances, by including plenty of yellow-orange coloured plant materials such as yellow-corn into the hen feed, or including plenty of crustaceans and fish into the duck feed. Furthermore, a number of approved colour additives are also permitted for use in poultry feeds; Carophyll Red is one of the more frequently used ones. Carophyll Red is a chemical which contains an orange-red carotenoid pigment called canthaxanthin. Canthaxanthin is found naturally in food such as mushroom, crustacean, fish, green algae and egg; and is permitted for use in poultry feeds as a colour additive in many countries including members of the EU , Canada and the Mainland.

Working closely with the Mainland authorities, the CFS is in the process of reviewing the existing legislation with a view to making amendments to strengthen control on the import and distribution of eggs and their products. On the other hand, the CFS will continue to monitor illegal use of Sudan dyes in food under the Food Surveillance Programme, and release the findings to members of the public in an open and timely manner.

Advice to the Consumers

Readers may obtain further information from the following websites: 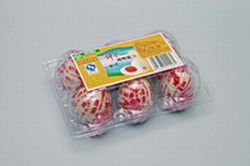