Summary of the Incident

The Centre for Food Safety (CFS) conducted prompt investigation in September and October 2006 into the source of several suspected food poisoning cases which were compatible with norovirus infection caused by consumption of raw oysters. Upon identifying a common supplier, the CFS requested the supplier concerned to stop distributing the affected oysters which were claimed to be imported from Chile and to provide information on their distribution. In the absence of relevant information that was required to protect public health, the CFS made an appeal to the trade to be on the alert by revealing the incident. No more related cases were reported after implementing the control measures. 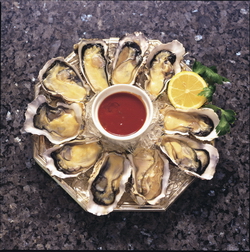 CFS's actions to control the infection

In deciding the necessary actions to be taken, protection of public health and public interest were the prime consideration and a number of factors were taken into consideration: (i) clinical and epidemiological findings showed that these food poisoning outbreaks were compatible with norovirus food poisoning outbreaks caused by raw oysters; (ii) investigation at the food premises involved did not identify any environmental hygiene factors contributing to the cases or any suspected food items other than oysters; and (iii) the batches of raw oysters concerned were found to be sourced from the same supplier.

Norovirus is transmitted primarily through the fecal-oral route via contaminated food or water although spread via direct person to person contact, or via contaminated objects or aerosols is also common. Norovirus is commonly found in sewage-contaminated water, thus filter-feeding shellfish such as oysters are more susceptible to contamination. Norovirus does not multiply in food, however, it can survive freezing temperature. Consuming raw oysters, whether chilled or frozen, poses the risk of contracting norovirus infection.

The incubation period for norovirus infection is usually between 24 and 48 hours. The infection tends to be mild and self-limiting characterized by vomiting, non-bloody diarrhoea, abdominal cramps, nausea, and sometimes lowgrade fever. Norovirus is highly contagious; its infective dose can be as low as ten viral particles. Norovirus is causing increasing public health concern in recent years both locally and internationally. In the United States , it is thought that at least 50% of all foodborne outbreaks of gastroenteritis are attributed to norovirus whereas the virus ranked one of the top five food poisoning organisms locally in recent years. Owing to the fact that the number of viral particles is low and that it may vary from one shellfish to another, it is often difficult to detect the virus in food samples related to foodborne outbreaks.

Graph: Number of norovirus food poisoning outbreaks related to consumption of oysters and persons affected, 2001 – 2006 (as of 2 November 2006 ) 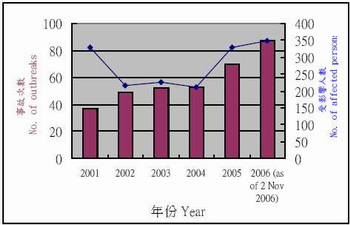 Members of the trade should obtain shellfish including oysters for raw consumption from reliable sources, and should ensure that the shellfish is fit for human consumption. All shellfish should be properly handled to minimize risk of contamination.

For readers who are interested in learning more about norovirus and the incident, please visit the following web pages for further information.