Adverse health effects due to consumption of raw or undercooked freshwater animals are reported from time to time. Since June of this year, over a hundred people have been infected with parasites in Beijing after eating raw snails. Investigation found that the snails were infested with a parasite known as Angiostrongylus cantonensis. In Guangzhou, cases of Clonorchis sinesis parasitic infection were also reported due to the consumption of raw freshwater fish.

Angiostrongylus cantonensis may invade the central nervous system and lead to meningitis. Clonorchis sinesis, which stays and irritates the bile duct, is a risk factor for cancer of bile duct.

To avoid being infected with parasites and other pathogenic microorganisms, consumers should not eat raw freshwater animals such as fish, shrimp, snail, crab and frog and should cook these food items thoroughly before consumption. Consumers should also note that wine, vinegar, wasabi, mustard and spices cannot destroy the parasites. In Hong Kong, it is against the law to sell Chinese dishes Yu Sang (i.e. freshwater fish intended for raw consumption). 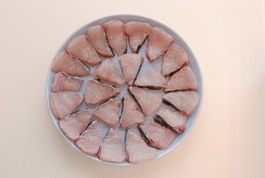