What are the Sources of Mycotoxins in Food?

Mycotoxins are naturally occurring toxins produced by certain species of moulds and are toxic to humans. The better known examples include alfatoxins and ochratoxins. Some scientists suggest that the toxins, produced as a defence against other moulds and animals on their sources of food, normally develop before harvest and during storage of crops. The growth of toxin-producing fungi can occur in large varieties of crops such as cereals, oilseeds and fruits, which are susceptible to mould infestation under high temperature and high humidity. Crops under adverse planting conditions or threats of pest infestation are also vulnerable to moulds. Fungi may not be visible to the naked eye in infected grains due to processing, but the toxins may have already diffused into the grains during the growth period.

Although most mycotoxins in food are found in cereals and cereal products, the toxins may also exist in milk, livers and kidneys of animals fed on contaminated feed. 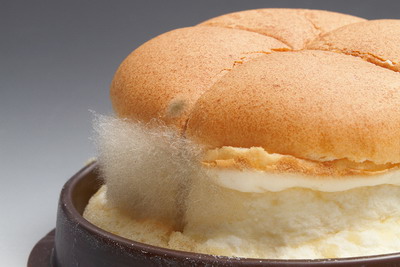 Mycotoxins can cause a wide range of adverse health effects in humans, like the disorders of the immune system, liver or kidney. Although acute mycotoxin poisoning is rare, persistent exposure to aflatoxins can lead to liver cancer.

Ways to Reduce Exposure to Mycotoxins

As mycotoxins are ubiquitous in nature, there is no way to totally eliminate them from food. Despite this, by observing good agricultural practices at various stages such as planting, pre-harvest, harvest, storage, transport, processing and distribution of crops, and adopting a management system for food production based on the principles of Hazard Analysis and Critical Control Points (HACCP), mycotoxin contamination in food can be reduced.

In order to minimise dietary exposure to mycotoxins, cereal products should be stored in cool and dry places or according to the storage instructions on the product labels. Never consume foods with the presence of visible moulds or obvious damage.

Responsibilities of the Food Trade

Trade members are advised to note the followings to reduce levels of mycotoxins in food to a minimum.

To minimise the potential risk of salmonellosis due to the consumption of eggs and egg products, good manufacturing and handling practices should always be observed. The followings are some advice to the trade:

(A) Handling of Raw Materials

(B) Manufacturing and Storage

Food substances are chemical in nature. Theoretically, as long as a process causes chemical changes in food, it will generate chemicals and some of them could be harmful. Process contaminants are chemical substances that are produced in food during food manufacturing, cooking (including home cooking), packaging and other processing activities. 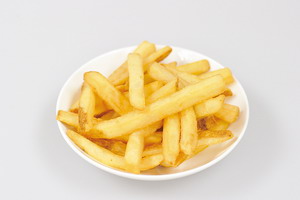 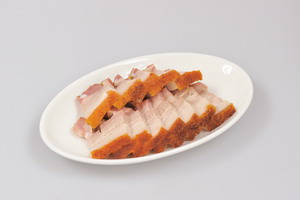 Examples of process contaminants produced by dry-heat cooking include acrylamide in French fries and PAHs in roasted pork.

Risk of PAHs in Barbecued Meats

PAHs refer to a large group of organic chemicals containing rings of carbon and hydrogen atoms. PAHs are present everywhere in the environment as pollutants in air, soil, water and foods. Formed during incomplete combustion of fuels and organic substances, PAHs are also found in vehicle emissions and tobacco smoke.

In view of our concern on the carcinogenicity of PAHs and their damage on genetic materials inside cells, it is not possible to establish an intake level without risk. The Joint Food and Agriculture Organization/World Health Organization Expert Committee on Food Additives (JECFA) is of the view that the intake of PAHs should be as low as practicable. In its evaluation of PAHs in 2005, JECFA concluded that the dietary intakes of PAHs were of low concern for human health. JECFA recommended some measures to reduce the intake of PAHs such as avoiding direct contact of foods with flames, and cooking with the heat source above the food, etc.

The Food and Environmental Hygiene Department (FEHD) conducted a study on PAHs in 2004. Samples of barbecued meats, including siu mei (namely roasted pork, BBQ pork and roasted ducks) and dried meats (namely beef jerky and pork jerky) were collected and analysed. It was found that a higher cooking temperature or a shorter distance between the food and the heat source would give rise to higher PAHs levels in the food. Furthermore, the total PAHs levels in roasted ducks were higher on the skin and in the fat portion (the outer part); and charcoal grilled foods contained more PAHs than foods prepared by gas grilling or electric oven roasting. Nevertheless, it was also found that the total PAHs levels in siu mei prepared by electric oven roasting or gas grilling were similar to PAHs levels in other foods reported in overseas studies. In other words, siu mei prepared in these ways was not a particular high risk food item. 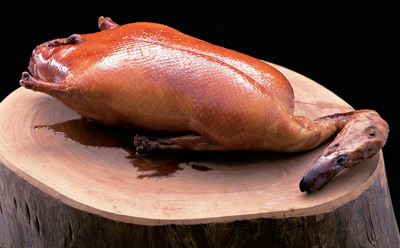 Thanks to today's new trends, vegetarian food is no longer confined to the traditional recipes. There are Chinese, Western, Japanese, and many other styles. In this issue, we are honoured to have invited Chef LI Wing-keung, Head Chef of Gaia Veggie Shop (Wong Tai Sin Branch), a signatory of the Food Safety Charter, to demonstrate how to prepare a vegetarian dish - Mushroom Rolls with Herbs. This dish, with mushrooms as the main ingredients, blends the Chinese cooking method with the Western one. 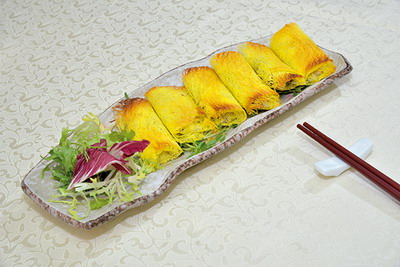 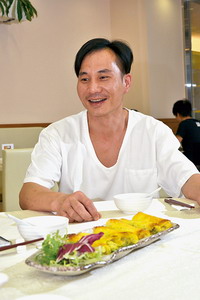 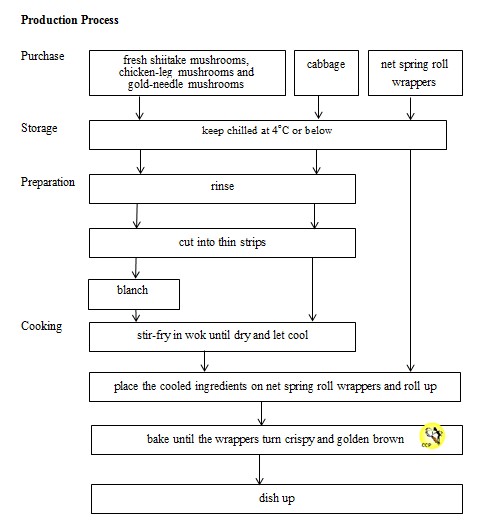 It is a step or procedure in a food manufacture process at which control can be applied and as a result, food safety hazard can be prevented or eliminated.

There is one Critical Control Point in the production of Mushroom Rolls with Herbs:

To facilitate better communication and interaction with the public, the Centre for Food Safety (CFS) of the FEHD launched on 1 October 2013 its Facebook page（www.facebook.com/CentreforFoodSafety）as an additional channel to disseminate important information on food safety and health more quickly and directly to Facebook users.

The CFS Facebook page contains a wide range of information including food alerts, food safety reports, food safety tips, results of theme studies and publications issued by the CFS. In addition, members of the public can also view again the Announcements in the Public Interest produced by the CFS as well as highlights and photographs of publicity activities on food safety. The CFS will also upload information on food safety-related seminars and workshops to keep users posted. 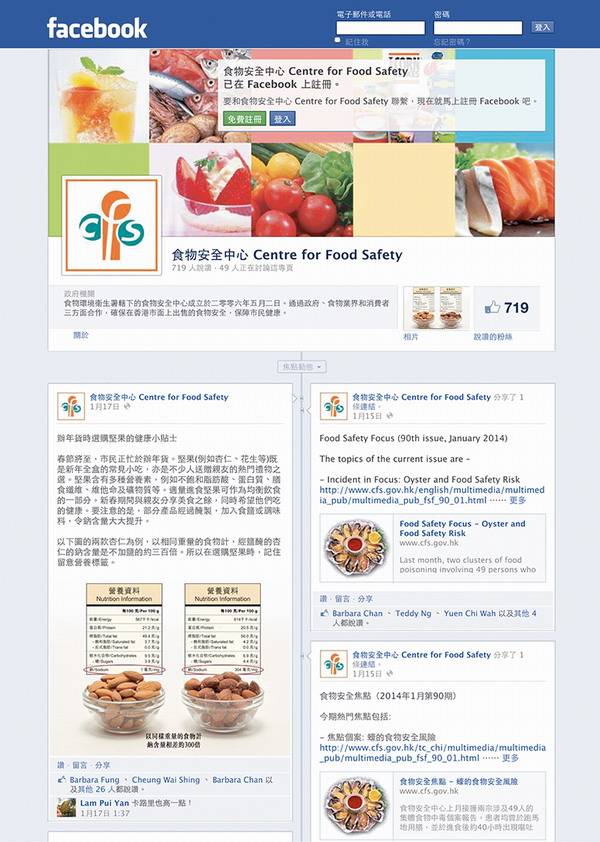 In response to the Western Pacific Regional Food Safety Strategy 2011-2015 of the World Health Organization (WHO), the CFS will organise food safety talks on "High Risk Food" in all districts in Hong Kong from now till 2015. The objective is to promote food safety awareness among food handlers engaged in handling high-risk food (such as sushi, sashimi, oysters and meat to be consumed raw). The talks will be conducted in Cantonese and free of charge.

Food premises will receive invitation letters and enrollment forms providing details including the dates, time and venues of the talks to be held in respective districts. Food handlers, if interested, may call the CFS on 2867 5147 for enquiries from 9:00 am to 12:00 noon and 2:00 pm to 5:00 pm on Monday to Friday (except public holidays). 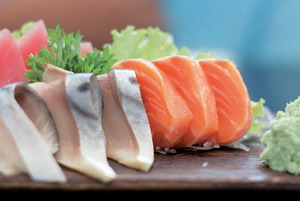 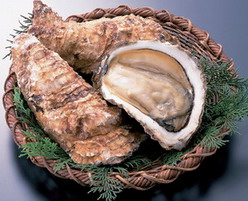 Is your intake of iodine adequate?

According to a report released by WHO in 2007, about 31% of the world's population was estimated to have insufficient iodine intakes, with pregnant/lactating women, infants/young children and South-East Asians as the three most vulnerable groups. In 2003, the Hong Kong Expert Panel Group on Iodine Deficiency Disorders, formed by local academics and experts, also examined local data and considered borderline iodine deficiency existed in some local expectant mothers.

While updated clinical and biochemical (e.g. urinary iodine level) data would help further evaluate the actual health effects on humans, the current findings suggest that the population may need to pay attention to their iodine intake. A note of caution: patients with underlying thyroid diseases and people with very low exposure to iodine for a prolonged period should consult their doctors and are not recommended to increase iodine intake suddenly.

To meet their dietary iodine requirement, people vulnerable to iodine deficiency should consider the following approaches: 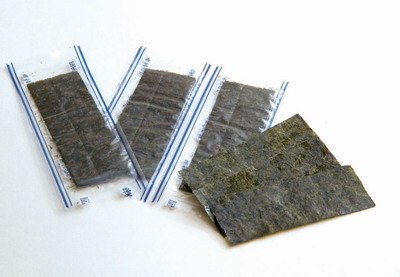 The human body actually needs only a small amount but regular daily intake of iodine (see WHO's recommended iodine intake in the table above). When ingested in large amounts, iodine is readily excreted through the kidneys into the urine. While excessive iodine intake for a long time may disrupt the normal functions of the thyroid gland, the tolerable daily intake for healthy adults up to 1 000 μg/day.

The public is advised to include foods that are rich in iodine in their daily dietary choice and take precautions to reduce iodine loss as iodine may dissolve in water during cooking. To retain the maximum amount of iodine in food, the public may steam or stir-fry foods with less oil, and cook clean crustaceans intact.

According to the findings of the study announced by the CFS, the following food groups are rich in iodine (μg/kg):

Including iodine-rich foods, such as (a) shellfish and marine fish and (b) seaweeds, in the diet helps to meet iodine requirement.

Use of Iodised Salt in the Diet

WHO has recommended iodised salt as the solution for countries where iodine deficiency is of public health concern. Iodised salt is not yet widely available in Hong Kong though around 70% of households throughout the world have access to it.

Regarding the quantity, WHO considers that replacing 5 g of ordinary salt from all sources in an adult's diet with iodised salt each day is generally safe. This will add an extra 100 to 200 μg of iodine to the daily diet, if the salt is fortified according to WHO's recommendation at 20 to 40 mg iodine per kg of salt.

When used in domestic setting, iodised salt should be stored in a tight and coloured container at a cool dry place and preferably added immediately before the food is served. It is because the iodine contained in iodised salt is generally unstable and may be lost due to humidity and exposure to heat and sunlight.

The CFS receives from time to time complaints about suspected artificial colours exuded from vegetables such as purple sweet potatoes and eggplants during washing or cooking. After investigation, these food items were found to contain naturally occurring colours and there was no evidence that artificial colours had been intentionally added. In fact, it is a normal phenomenon that colours naturally present in fruits and vegetables (e.g. anthocyanins in sweet potatoes and red cabbages; lycopenes in tomatoes; anthocyanins in eggplants; and carotenes in carrots) will exude during food preparation. For instance, upon investigation and testing in response to the suspicious use of colouring matter in purple sweet potatoes, it was revealed that all samples of purple sweet potatoes contained a purple pigment known as anthocyanin. It is a naturally occurring colour found in purple sweet potatoes and there is no evidence that the colour has been added to them. In fact, anthocyanins are naturally present in many edible fruits and vegetables such as grapes, red cabbages and berries, and are generally innocuous for human consumption. Colour seepage is a natural phenomenon that often occurs during the handling of fruits and vegetables, and is nothing to be worried about.

How is colouring matter regulated in Hong Kong?

The types of colouring matter permitted for food use are specified under the Colouring Matter in Food Regulations (Cap. 132H). It is also stipulated that no meat, game, poultry, fish, fruit or vegetable in a raw and unprocessed state shall be added with any colouring matter. Starting from July 2007, food additives including colouring matter in prepackaged food available in Hong Kong must be listed by their functional classes and specific names or identification numbers under the International Numbering System for Food Additives with or without the prefix "E" or "e" on the food label.